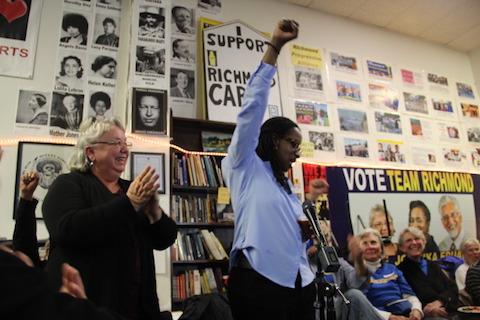 Since 2004, members of the Richmond Progressive Alliance (RPA) have won ten out of the sixteen city council and mayoral races they have contested in their majority minority city of 110,000.
Last November, progressives gained an unprecedented “super-majority” of five on Richmond’s seven-member council—despite more than a decade of heavy spending against them by Chevron Corp. and other big business interests. For 12 years, RPA candidates have distinguished themselves from local Democrats by their lonely, Bernie Sanders-like refusal to take corporate contributions.
Now two Progressive Alliance leaders–city councilors Jovanka Beckles and Gayle McLaughlin–are preparing to run as  “corporate free” candidates for higher office. It’s the first time either one has sought a ballot line outside their own blue-collar refinery town.  Both hope to capitalize on the energy and enthusiasm (and campaign donations) of thousands of former Sanders supporters, including those who tried to reform the Democratic Party at its statewide convention in Sacramento May 20-21.
At a lively pre-convention gathering of 500 “Bernicrats” last Friday night, McLaughlin discussed her not-quite-final decision to run for lieutenant governor of California as a progressive independent.  Like Sanders during his 2014 visit to Richmond–when he was still soliciting advice from out-of-state audiences about running for president—the former Richmond mayor asked the crowd for its “input.” (The response when she finished her speech, was loud chanting: “Run, Gayle, Run!”)