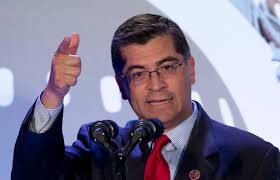 The lawsuit alleges the Trump Administration violated the Constitution and other laws when it rescinded the program.

It was announced as Mexico's top diplomat, Foreign Relations Secretary Luis Videgaray visited California's state capital to meet with lawmakers and DACA recipients as part of a two-day trip.

The lawsuit relied mainly on procedural arguments, saying federal law requires that such decisions be made for sound reasons and only after the public has a chance to make formal comments. It said the administration failed to follow a federal law requiring it to consider negative effects of the decision on small businesses.

"We don't bait and switch in this country," Becerra said.

Though Maine is listed as a plaintiff, its participation happened because Democrat Attorney General Janet Mills signed the state up. She has frequently broken with Republican Gov. Paul LePage in joining other states in lawsuits that run counter to his conservative views on immigration and other issues.

LePage sued Mills earlier this year for abuse of power. Mills, a 2018 gubernatorial candidate, recently called on the Trump administration to maintain DACA. LePage is prevented from running again because he is in his second term and is prohibited from seeking a third one by the state's term limit law.

The University of California has also filed a legal challenge to ending the program.

Unlike the lawsuit filed in New York last week by the other states, the new challenge does not make the argument that Trump's decision was motivated by anti-Mexican bias.

Instead, it hones in on statements by Trump administration officials that the young immigrants in the program rob U.S. jobs from Americans and that the program led to a surge of Central American immigrants.

U.S. Attorney General Jeff Session announced last week that new applications for the program are being halted and that it the program will end in six months if Congress does not take action.

He said the administration was acting because President Barack Obama created the program without Congressional approval in what he called "an unconstitutional exercise of authority."
Posted by Duane Campbell at 4:21:00 PM