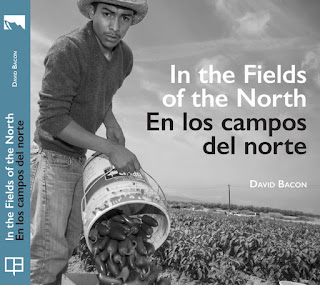 In The Fields of the North, Bacon uses his extensive and award-winning photography to tell more of the story. This is not just a book with some photos, but rather a series of extended photo essays (with over 300 photos)  showing that images and words have a combined power far beyond either words or images by themselves. Bacon tells the story of cycles of exploitation and poverty suffered by tens of thousands moving from season to season, working in the fields to harvest our food for subminimum wages, and facing the racism and political power of growers and their labor contractors.

In general, Bacon argues, farm laborers are paid more poorly today than were workers in the 60’s when the United Farm Workers union was organized and conducted its first strikes in the valleys of California.

Today many growers are "paying an illegal [subminimum] wage to tens of thousands of farm workers," Bacon says. Workers get about $1.50 for picking a flat of strawberries. "Each flat contains about eight plastic clamshell boxes, so a worker is paid about 20 cents to fill each one. That same box sells in a supermarket for three dollars...If the price of a clamshell box increased by five cents the wages of workers would increase by 25 percent."

While the United Farmworkers Union made an impressive gain in achieving unemployment benefits for farmworkers in the 1980’s in California,  undocumented farmworkers cannot collect unemployment for the long periods when there are no crops to harvest.

Recent legislation increases the California minimum wage to  $10.50 per hour in 2017, on the way to $15 per hour for all workers including farmworkers in 2023; that is, if it can be enforced where workers are often paid by piece work such as in the berries. While legislative gains promise improvements for some California farmworkers, farm labor in most other states is not covered by minimum wage laws.[1]

Where Does Your Food Come From ?

Bacon’s informative personal interviews and accounts reveal what today’s life is like for a wide variety of migrant workers in grapes, berries, lettuce and a variety of crops we serve on our tables; from living in caves, without housing, in river beds, and in cardboard shacks,  to living in the back seats of cars.[2]   The photographs speak volumes.

The photo essays make the difference in understanding the lives of farm workers and their families. They harvest our crops and they feed us. The work force is significantly female. Many suffer sexual assaults and exploitation, which they too often endure in order to keep their jobs and feed their children. These are excerpts from the personal tale told by Lucrecia Camacho:

“I began working when I was nine years old. In Culiacán I picked cotton.  I would get three pesos per day…From that time on, I have spent my entire life working. . .

When I was 13 my mother sold me to a young man and I was with him for eight months, I was soon pregnant.  After I started having children, they were always with me.  . .
After I came to the U.S., I did the same thing.  I took them to the fields with me and built them a little shaded tent on the side of the field… I began working here in the fields of Oxnard when I first arrived in 1985, and I did it until last year. I already had seven children by the time I got here.”

The author records the significant shift in farm labor that accelerated in the 80’s toward Mexican indigenous people, speakers of Mixtec, Triqui, and various other languages, who were pushed out of their homes in the south of Mexico and moved into the U.S. migrant stream largely in response to NAFTA.

The photo essays provide important contributions to our understanding of the major restructuring of the global economy we are experiencing. This economic restructuring (commonly known as neoliberalism) is directed by transnational corporations to produce profits for their owners. The impoverishment of the vast majority of people in pursuit of profits for a small minority has pushed millions to migrate from Africa, Asia and Latin America in search of food, jobs, and security. Global capitalism produces global migration.

A result is a situation in which workers on both sides of this border and around the world have been disempowered and impoverished. Workers everywhere are forced to accept ever-worsening wages and working conditions.

The problem in our economy is not immigration as Trump claims; the problem is our broken immigration laws that allow business to exploit workers who lack legal status, driving down wages for all workers. If every immigrant were allowed to get into our system of labor law, pay their dues, and work legally, we could block the corporations’ exploitation and eliminate much of the oppression in farm labor. But that will not happen until poor people have political power.

As Bacon argues, the work of the UFW and of smaller independent unions is vital.  At the same time, H2A workers (guest workers) are increasingly used to break efforts to form a union. The H2A program was established in 1986 to allow U.S. agricultural employers to hire workers in other countries and bring them to the U.S. in response to an alleged labor shortage.
This  alleged  labor shortage is in fact created by the restrictions of our broken immigration system and the current enhanced enforcement of ICE.  Use of H2A, or guest workers, rather than legal immigrants is the preferred form of immigration “reform” advanced by growers and the Republican party.

In prior years, Sakuma Farms relied on local workers and migrants from California (mostly indigenous Mixtec and Triqui) to fill its 7-800 picking jobs at the peak of the harvest.

In 2013 and 2014, the company applied to bring in H2A Workers. This year, another Washington berry grower, Sarbanand Farms, brought in over 500 H2-A workers, and working conditions were so bad that one worker died and 70 others went on strike.

Sakuma workers went on strike twice during the last year, seeking better wages and safe living conditions. Finally, the workers ratified a first contract this summer. If history follows the pattern of other farmworker contracts, the corporation will use the first opportunity it finds to break the contract (actually, it already has), while other growers like Sarbanand Farms bring in ever-larger numbers of H2A workers to prevent unionization.

“We can’t leave things like this.  There is too much abuse. We are making them right and making ourselves poor.  It is not fair.”  Rosario Ventura, a Sakuma Farms striker

The persistent poverty in the fields and the use of migrant labor as an exploitable resource is a result of strategic racism, a system of racial oppression created and enforced because it benefits the over-class of corporate agriculture and farm owners. It is a complex structure of institutions and individuals from police and sheriffs, to immigration authorities and anti-immigrant activists, politicians and elected officials and their support networks. These groups foster and promote inter-racial conflict, job competition, and anti-union organizing, as strategies to keep wages and benefits low and to promote their continuing hold on power and wealth.

Currently most farm workers lack legal protections and basic labor protections, while they live under the constant threat of deportation.

Bacon helps us to see the exploitation and to hear the stories of the oppressed in this current wave of migration. This labor force is all around us, but it is largely invisible. The Fields of the North makes them visible.

Duane Campbell is a professor emeritus of bilingual multicultural education at California State University Sacramento, a union activist, and past chair of Sacramento DSA.