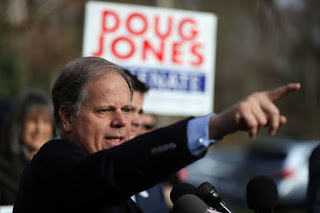 Tonight Alabama is sending a powerful message across the country.

The American people will fight back against bigotry, hate and, yes, pedophilia – and reject a man totally unfit to serve in the United States Senate. Republican, Democrat, Independent, Libertarian, Vegetarian – on this, there will be no compromise.

But if we take away one more lesson from Alabama, it should be this: Democrats can win – in every district, in every state, all across the country. So we need to fight harder than ever to recruit, support, and elect progressive candidates and compete in every election. The Roy Moores of the world aren’t going to go away, and we won’t win every fight. But sometimes, we will.

That’s why I’m doubling down on our fight to elect Democrats through our PAC for a Level Playing Field. Our PAC helps give smart, tough candidates across the country the resources they need to take on right-wing extremists and get in this fight for working families.


But unlike Republican Super PACs, our PAC for a Level Playing Field isn’t funded by gigantic corporate interests and deep-pocketed megadonors – it’s funded by grassroots donors like you,


We elected a Democratic senator in deep red Alabama tonight. Why? Because we had a good candidate. We had the right message. We had the wind in our sails. And we fought our hearts out.

We can’t stop now. The 2018 elections are less than a year away, and we need to invest in campaigns across the country. We need to take a stand against the hateful ideologies that have been making their way back into our country’s highest offices. And we need to fight harder than ever before.

Because if you don’t fight, you can’t win.

So I’m going to keep fighting my heart out. And, if we stand together, and if we fight together, I know we can make a powerful difference.


Thanks for being a part of this,