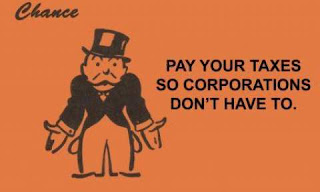 Tax Cuts for the Oligarchs
by Duane Campbell

The oligarchs in charge of the Republican Party have won the tax battle nationally. Now, the next step is our response.  California has long been cited as the 6th. or 7 th largest economy in the world. We should act upon this reality.
The oligarchs will cut the corporate tax from about 35% to near 21%.   California should raise its corporate tax ( franchise tax)  from 1.5% to 10%.
The oligarchs will eliminate the Estate Tax.
California should establish an estate tax of about 10% on estates larger than $5 million.  They will still get more of a tax cut than you or I get.  California  should recapture the money that the oligarchs are giving themselves in this looting of the economy.

But, won’t these taxes place the state at a competitive disadvantage ?  Yes, the Republican tax victory forces states into a race to the bottom. We should try to avoid joining this race.

States already have significant differences in tax structures.  For example, Texas has a very high property tax and no state income tax.  And, it has a petroleum extraction tax that taxes all oil taken from the ground on the radical theory that natural resources belong to us all.
So, if California raised taxes on corporations and estates, we too would have differences in tax structures.
In a couple of years when the economy adjusts to the corporate give away we should then re-consider these California tax rates.

What should we do with all this money ?
Health care for all, feed the children, combat homelessness and build a better society. I am confident that readers know additional places where funds are desperately needed.

We should seek candidates for state office that are willing to tax the oligarchs.