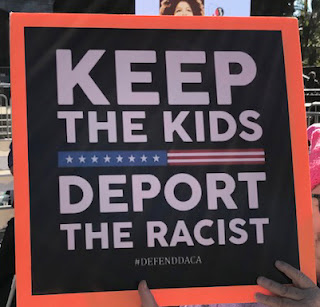 Over the last week we have seen the devastating impact of the right-wing extremist agenda that Republican rule in Washington is forcing on the nation. Over 80 percent of Americans support providing legal protection for the 800,000 Dreamers - young people brought to this country as children who are now our neighbors, our co-workers, our friends and our family members.
Despite the overwhelming view of the American people, Donald Trump, Mitch McConnell and Paul Ryan chose to hold the entire federal government hostage to their blatantly xenophobic and anti-immigrant views.
As I traveled the country in 2015 and 2016 some of the most moving meetings I held were with young Dreamers terrified that they would be rounded up and thrown out of the only country they have ever known. Trump promised to help the Dreamers while he was running for president but, in one of his series of lies, he has reneged on that pledge.
Make no mistake about it. This government shutdown and budget fight in Washington is also about our priorities as a nation. Republicans want massive increases in military spending while refusing to address the crises we face in health care, education, college affordability, infrastructure and more.
This is the wealthiest nation in the history of the world. Of course we can increase the standard of living of people in every zip code in this country - urban and rural - if we invest in our critical domestic needs. But we cannot expect that will happen when we have a president and a party beholden to the Koch brothers and other billionaire campaign contributors. Their agenda is exactly opposite of what the American people want.


From coast to coast Americans want a government that represents all of us, not the 1 percent. They don't want congressional leadership that has tried repeatedly to throw tens of millions of people off their health insurance and then looted the U.S. Treasury to give massive tax breaks to their fat cat donors. This right-wing Republican leadership has got to go! And we are the ones who have to send them packing.

But I cannot do it alone:

I, frankly, am outraged by what Trump and Washington Republicans are doing to our country and to our people. That is why it is so important that we take back the Congress in 2018 from these extremists and why I hope you will join me in that fight.
Being outraged, however, is not enough. We are the ones who have to make it happen. If we fail, what will you tell future generations when they ask, "What did you do in that critical moment when we still had a chance to set things right?"
How we win is straightforward. We have all witnessed the power of grassroots politics. Whether it was the 2016 primary campaign, the millions of women who took to the streets, the people from all walks of life who showed up at airports to protest the bigoted Trump Muslim ban, or the overwhelming majority standing with our Dreamer brothers and sisters, the message is clear. When we stand together we can build the America we all want to see.
Grassroots efforts have been successful in electing new progressive voices from all walks of life in places like Virginia, New York, Alabama, Mississippi and elsewhere. Grassroots efforts can transform this country. But we have to redouble our efforts if we are going to wrest our country back from those whose greed and dishonesty is destroying it.
That is why I want to announce to you a major new three-part initiative for this year and how you can be part of the fight to take our country back.
First, I am committing to travel the country in support of progressives running up and down the ballot. Like I did when together we rallied millions against the Republicans' failed attempt to repeal the Affordable Care Act, I intend to go to every corner of this country to help build the electoral wave that will sweep Republicans out of the Congress, out of governors' mansions, out of state houses and out of city and town halls.
I hope in my travels that I will see you at these events. Your attendance is critically important to showing the strength of our movement and our resolve.
Second, as we work to create Democratic majorities in both houses of Congress, I will be giving special focus to a core group of up-and-coming progressive candidates at the national and state level. We need progressive Democrats who are going to vigorously stand up against Republicans and fight for our values. But the only way they win is if we help them.
These are the type of candidates who do not draw big dollar contributions but they can prevail if we provide them the small dollar, grassroots support they need. As we introduce this growing list of candidates to you over the next couple of months I hope you will give them the support they need to carry our fight forward in their primaries and in the general election.
Finally, I am excited to announce that we will be reactivating the distributed organizing network that was at the heart of our grassroots success in 2015/2016. This will give us the capacity to reach out to millions of households by phone, by email, on social media and by text message.
This will give each of you the power to help elect progressives and defeat Republicans all across the country.
What we have seen over the last depressing year is a full out assault on working people of all races, an assault on marginalized communities and an assault on people based on gender, race, ethnicity, religion, sexual orientation, gender identity and national origin.
Trump and the Republicans want to divide and conquer while the billionaire class laughs all the way to the bank and the rest of America falls further and further behind. We cannot let them do it.
The late Congresswoman Barbara Jordan summed it up so well when she described the aspiration of everyone in this country - "What the people want is very simple - they want an America as good as its promise."
Creating that America has been the motivation of my entire political life. I have always believed that together we could make it a reality. Even in these dire times, I feel it more strongly than ever.
Join me in the fight!
In solidarity,