The Trump Government Shut Down 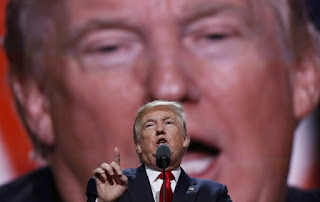 Let us be clear.  The shut down of the U.S. government was due to a dispute over spending because Donald Trump ordered the end of the DACA program ( Deferred Action for Childhood Arrivals). The spending bill assumes the end of DACA and demands a vast increase in spending on the border, including a wall.  At present the  critical issue  is restoring DACA.  Note: restoring.  We had a DACA program that protected the lives of some 800,000 young people who came to the U.S. as children.  Trump created this crisis and the Republicans are using the crisis to promote their anti immigrant agenda.
Since his campaign, Trump has doubled down on racism, sexism and bigotry, to the delight of David Duke, the American Nazi Party, and others like them. The control of the Republican Party by hard core anti immigration forces emboldens hard-core racists, Islamophobes, misogynists, and anti-immigrant groups, while promising an assault on workers' rights.
The White House has demanded that an increase of 33 billion dollars in funding for anti-immigrant measures be included as a part of the DREAM act. 18 Billion dollars of this funding increase would be spent on the border wall and the rest on terrorizing immigrant communities in this country.

As the Southern Border Communities Coalition says, “The Administration’s  misguided and outlandish proposal would waste $33 Billion dollars of taxpayer money to further militarize border communities, by building walls and deploying more federal agents. This funding request is an affront to the 15 million people who call the borderlands home . The funding proposal  further  fails to address border residents’ true needs including oversight and accountability for abusive Customs and Border Protection personnel.  Increasing the number of agents would have little to no impact on security and would be fiscally irresponsible and unwarranted.”
The demands of the Republican anti immigration forces include more deportations, punishments for cities that protect their immigrants with sanctuary laws, and an increase in  ICE’s budget.
These demands are unacceptable. If Trump’s version of the DREAM act passes, immigrants in this country will face arbitrary harassment by hostile federal agencies. Trump  claims that this violence is necessary in order to fight terrorism and drug cartels. These threats used to justify their draconian demands are either imaginary or exacerbated by our deportation policy.
Trump  also claim that they want additional measures to punish those who use what the administration calls loopholes in our immigration laws including the preferences for family unification.  He calls this chain migration.  Removing these “loopholes” would uproot thousands of people who know no other home, many of whom are children. Congress must instead pass a clean DREAM act. Anything else will wreck countless lives on both sides of the border."