Elizabeth Warren On the Banks 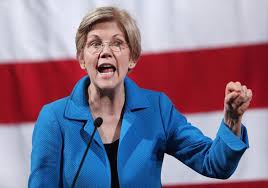 While millions of hard-working people lost their jobs, their homes, and their life savings, the big banks got a $700 billion no-strings-attached bailout from the American taxpayers. A bailout and nobody went to jail for causing the worst financial crisis since the Great Depression.

After the crash, Congress passed legislation called Dodd-Frank, which put new rules in place for the biggest financial institutions to stop another crisis and taxpayer bailout.

But now, less than a decade later, Senate Republicans – and some Senate Democrats – are getting ready to gut a lot of those rules for some of the country’s biggest banks. The bank lobbyists have been hitting Capitol Hill hard, and they have a Dodd-Frank rollback bill lined up with the support of every Republican and twelve Democrats.

We need to make some noise about this big wet kiss to the big banks by reminding Senators as loudly as possible: they work for the American people, not for big bank lobbyists. Sign our urgent petition right now to tell the Senate not to weaken the rules on big banks.


Dodd-Frank said that every bank with more than $50 billion in assets – that’s roughly the 40 biggest banks, or the top 0.5% of all banks by size – would have tougher rules than smaller banks. That means mandatory stress tests to analyze how they would react to another financial crisis and plans for how they would break apart, sell off assets, and liquidate in bankruptcy if they started to fail.

There’s a reason for this common-sense oversight of big banks: They are so big that they could potentially bring down the whole economy again if they failed and taxpayers didn’t bail them out again.

The bill that could be up in the Senate in the next few weeks would let almost 30 of the 40 biggest banks in the country could go back to looser rules like the ones that let them run wild before the 2008 crisis.

What could possibly go wrong?!?

The big bank lobbyists want you to believe that this bill is protecting poor little mom and pop banks from getting buried under red tape. But this bill is aimed at helping the big guys. These 30 banks got nearly $50 billion in taxpayer bailouts during the 2008 crisis.

And remember Countrywide? It was at the heart of the financial crisis. At its peak, Countrywide was financing one out of every five mortgages in the country. It was a major player in blowing up the economy. You know how big Countrywide was when it was leading the toxic mortgages that blew up our economy? About $200 billion – smaller than some of the banks that would be turned loose by this bill.

Let’s be clear: Banks of all sizes are making record profits right now. And if that wasn’t enough, the Republican tax bill just gave away billions to the big banks. They are swimming in money. There is no reason at all to roll back the rules on these big banks so they can pad their pockets even more – and cut them loose to take on wild risks again.

The American people – Democrats, Republicans, and Independents – want tougher rules on big banks, not weaker ones. It’s time to hold Republican AND Democratic Senators who support this bill accountable for siding with their big bank donors instead of working families.

I get it: Wall Street has money and power. But there are a lot more of us than there are of them. The only way to slow down this Bank Lobbyist Act is if we speak out and fight back. Sign our petition to protect Dodd-Frank and make your voice heard – and ask your friends to sign as well.

The big banks will do anything they can to pass this dangerous bill into law. We need you out there giving everything you’ve got.

Thanks for being a part of this,