What Trump supporters have done to America 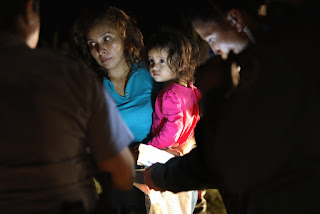 This month, ICE began readying roughly 1,000 detainees, caught at the border trying to enter the country without documents, to be sent to the Victorville federal prison in California. It was another extraordinary shift in how America views immigrants – legal and otherwise – and how this administration views human rights and presumptions of innocence as mere inconveniences in its crusade to reshape the world.
To pre-empt critics who say that I advocate open borders, that is not what I am saying. But I am advocating empathy. Anyone who has ever sat in an immigration court along the border and watched the proceedings – as I have, in Tucson, Az. – will know that the men and women paraded through the courtroom after being detained in the desertlands are not criminal masterminds; they are desperately poor people, oftentimes campesinos displaced from their land in Mexico, in Honduras, in Guatemala, in El Salvador.
NONE OF THIS IS THE STUFF OF DEMOCRACY. THOSE WHO DEFEND IT ALL, SIMPLY FOR PARTY-POLITICAL ADVANTAGE, SHAME ON YOU.
They trek north in flimsy sneakers and plastic sandals, generally woefully unprepared for the temperature and geographic extremes of the desert; many, by the time they are arrested, are dehydrated and violently sick. They come north not as part of an organized “invasion” army, but as human beings trying to earn enough money to feed their hungry children. If they make it across the border, they live in the shadows, work for pitifully low day-labor wages, are ripe for exploitation and violence.

Yes, we have a broken immigration system; and, yes, we face rolling humanitarian and economic crises in the countries south of the U.S. border. But no, the answer is not to round up thousands of the hemisphere’s poorest and least fortunate people and house them for months and years at a stretch in federal prisons with hardened, and convicted, criminals, while they await trial for the misdemeanor crime of seeking paperless opportunity in a place they have long mythologized as the land of the free.
Nor is the answer to rip young children from their parents’ arms when those parents do exactly what the asylum laws tell them to do: Present themselves at a border checkpoint and claim political asylum. Yet that is now happening on a daily basis – and the children separated in such a brutal way are then either placed in foster care or in vast government-run holding facilities.
One, in Brownsville, Texas, refused entry recently to U.S. Sen. Jeff Merkley of Oregon; he reported that, from what he could see while trying to get inside, the children were being kept in cubbies that resembled “dog kennels,” surrounded by cyclone fencing, with space blankets in lieu of cushions. Those kids will be traumatized for life as a result of what the government is doing to them.

The past couple of weeks have been one of those periods when so many grotesque events have unfolded simultaneously that it’s almost impossible to know where to begin. So, let me just list a few.
In addition to the vicious actions of the U.S. government vis-à-vis undocumented immigrants, the American ambassador to Germany, Richard Grenell, gave an interview to Breitbart in which he said he sought to empower Europe’s far-right conservative movements, regarded Austria’s far-right chancellor as a “rock star” and stated that, in contrast to the failed policies of the German government, the rising populist movements America embraces wanted to strongly curtail immigration into the Western world.
One would think the U.S. would think twice before allowing America’s representative in Germany, of all places, to preach the virtues of race purity and neo-Nazism to Europeans. But in our shameless, ahistorical era, Grenell’s words didn’t even merit a rebuke from the State Department.
What else? Oh yes, the American president declared Canada, the EU, and Mexico to all be “national security” threats meriting tariffs on the metals they import into America. He justified this, in a phone call with Trudeau, by asserting (wrongly) that Canadians burned down the White House in 1812. He personally insulted the Canadian and French leaders in a Twitter barrage before the G7 meeting in Quebec, and destroyed all semblance of civility in an extraordinary onslaught against Trudeau after leaving the meeting early for Singapore. And he pointedly refused to stay to participate in the discussions on global warming and protecting the environment.
Meanwhile, he went out of his way to flatter Kim Jong-Un; stated that he wanted Russia (currently under U.S. sanctions for meddling in the U.S. election and for annexing Crimea) readmitted to the G7; and bent over backwards to ease the economic sanctions against a Chinese technology company that his own administration has acknowledged is stealing American intellectual property.
Of course, a week in Trumpland wouldn’t be complete without more truly insane domestic actions. too. Witness the Justice Department’s recent decision not to defend the constitutionality of the parts of the Affordable Care Act that prevent insurance companies either denying coverage to sick people or forcing them to pay vastly more for their coverage. Having failed repeatedly to gut the ACA through legislation, Republicans have now simply decided to gut it via executive fiat, turning their backs on millions of particularly vulnerable Americans who finally, under the ACA, were able to access affordable health coverage.
That Trump and Sessions feel empowered to fundamentally reshape the American health system using a legal sleight of hand ought not to be a surprise. After all, Trump-the-would-be-king has announced that he has the “absolute right” to pardon himself and anyone else for any and all crimes; and his attorney, Rudy Giuliani, has declared that the president isn’t indict-able for any crimes, asserting that Trump could have shot Comey in the Oval Office and still be immune from prosecution.
In the new Trump-reality, the president can do anything and not be charged with a crime; and can order his minions to do anything, secure in the knowledge that even if they are charged their boss will then pardon them. Such a legal theory could allow for, say, state-sanctioned death squads, torture, wholesale embezzlement of state funds, the imprisonment of political enemies and so on.
None of this is the stuff of democracy. Those who defend it all, simply for party-political advantage, shame on you.
You are turning America into a global pariah state. You are shredding the culture of democracy. You are undermining multinational institutions.
And you are normalizing extremism and irrationalism and cruelty as governing principles. Shame. Shame. Shame.
Sasha Abramsky is a Sacramento writer who teaches at UC Davis. His latest book is “Jumping at Shadows: The Triumph of Fear and the End of the American Dream.” He can be reached at sabramsky@sbcglobal.net.