Let me tell you about two different kinds of meetings that took place this past weekend.
On Friday, along with Alexandria Ocasio-Cortez, I went to Kansas and held rallies with two great progressive candidates who are running for Congress. In Wichita, according to local media reports, more than 4,000 people joined us at a rally with James Thompson. 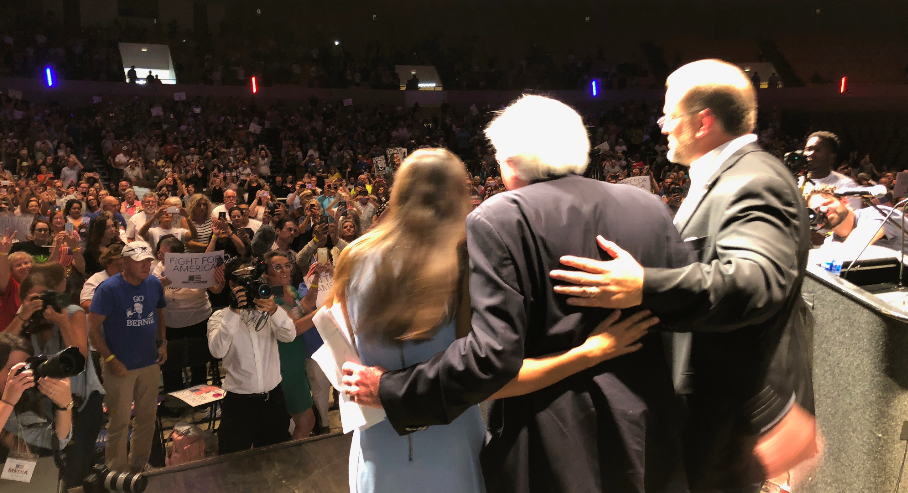 The rally in Wichita with Bernie, Alexandria Ocasio-Cortez and James Thompson.
Then in Kansas City, at our rally for Brent Welder, the convention center was so crowded the staff had to remove a wall in the middle while the event was going on to let more people in. These were incredible crowds coming out in more than 100-degree weather to participate in our political revolution. And, yes, this was Kansas where Republicans control almost everything.
There was quite a different event in Columbus, Ohio. Two hundred and fifty wealthy invited Democratic donors and Wall Street insiders came together at a gathering hosted by a real estate billionaire. Why were they there? The headline on an NBC News story tells it all:
"Sanders' wing of the party terrifies moderate Dems. Here's how they plan to stop it. Party members and fundraisers gathered for an invitation-only event to figure out how to counteract the rising progressive movement."
What are they concerned about? That our ideas, such as Medicare for all, tuition-free public colleges and universities, a $15/hr minimum wage and progressive taxation are now mainstream positions.
Make no mistake about it. The gathering in Columbus was not simply a social event. The corporate Democrats are plotting how to defeat progressives the only way they know how — with big money. But you’ve shown that, together, we can overcome their brand of pay-to-play politics.
Brent Welder is one of those candidates the political and financial establishment wants to beat. But if we’re with him, he’s going to win:
The big money interests should be scared. During the past two weekends, I have been traveling across the country and what I’ve seen has been remarkable. This weekend we were in Kansas. The previous weekend I was in Minnesota where we held two rallies for Congressman Keith Ellison who is running for Attorney General there. We packed “First Avenue” in Minneapolis where the crowd heard not only from myself and Keith but an inspiring speech by Ady Barkan. Diagnosed with ALS, Ady has dedicated the remainder of his life to fighting for Medicare for all and other progressive goals. It would be impossible to hear Ady and not be inspired.


Later in Duluth, an area many in the national media would like to write off as “Trump Country,” we spoke to a packed auditorium of progressives hungry for changes.
We then drove to Eau Claire, Wisconsin, where the next morning we held a rally with Senator Tammy Baldwin. Once again, in a conservative part of the state, the turnout was great. Tammy is one of the strong progressive members of the Senate. That is why the Koch Brothers are spending millions to try and defeat her.

The rally in Eau Claire with Bernie and Senator Tammy Baldwin.
Later that day, we held a rally in the UAW hall in Janesville, Wisconsin with Randy Bryce, a union ironworker who is running a great grassroots campaign for Congress in the seat currently held by Speaker Paul Ryan. Wouldn't that be a great victory for Randy to win the seat currently held by the Republican Speaker? And, from what I saw in Janesville, he can do it.
From Wisconsin, we flew to Pittsburgh where I addressed the American Federation of Teachers (AFT) national convention. While in Pittsburgh, I also held a rally with progressive John Fetterman, who won an upset victory in the Pennsylvania Lieutenant Governor Democratic Primary. At the rally Summer Lee and Sara Innamorato, two young Democratic Socialists in Pittsburgh, talked about the recent landslide victories they won as they unseated two long-term, veteran incumbents. Their campaigns brought together hundreds of volunteers who knocked on doors to fuel the progressive victory.

The rally in Pittsburgh with Bernie, John Fetterman, Summer Lee and Sara Innamorato.
These are the type of campaigns we need to run if we are going to win. And right now one progressive, grassroots Democratic candidate needs your support.
As Alexandria, Summer, and Sara have demonstrated, we can win seemingly impossible campaigns if we run on issues that speak to the needs of working people while harnessing the grassroots energy to drive our campaigns forward.
There is a reason why the corporate Democrats are getting nervous. And that's because we are making real progress in transforming the party and the nation.
Let's keep going forward.
In solidarity,
Bernie Sanders
Not paid for by any candidate.
Posted by Duane Campbell at 3:29:00 PM