The White House just notified Congress of its plans to sign a revised version of the North American Free Trade Agreement (NAFTA) — and civil society groups are warning that the current proposal is still not strong enough to protect jobs, raise wages, defend human rights and protect the environment.
TAKE ACTION: Please urge your Congress members to make clear that they will only support a pact that adds strong labor and environmental standards with swift and certain enforcement and that ends NAFTA’s outsourcing incentives.

For over a year, we’ve been pushing trade negotiators to deliver a comprehensive NAFTA replacement that finally puts the interests of working families and healthy communities in all three countries ahead of corporate profits.

Labor unions that have been briefed on portions of the NAFTA renegotiation’s current “agreement in principle" have warned that, while there has been progress in several areas, enforcement mechanisms for the proposal’s labor standards are seriously lacking.  That needs to be addressed if a new deal is going to stop outsourcing and the ongoing race-to-the-bottom in wages.

Environmental groups have similar concerns about the enforceability of environmental terms, as well as reported handouts for oil and gas corporations that could prolong NAFTA’s threats to our air, water and climate.

And the secretive process that the administration has chosen to employ in the negotiations makes it near-impossible for the public to know what has and hasn’t been agreed upon thus far in other important areas, including access to medicine, food safety and more.
Negotiators will be working towards a final text over the coming weeks.  The public deserves to know what has already been proposed in our names, and to weigh in on all issues in the ongoing negotiations.
ACT NOW: Please ask your Senators and Representative to demand that the administration release all NAFTA texts and deliver a deal that benefits working people and the planet.
The details of any ultimate deal obviously matter tremendously.  Each day, NAFTA continues to destroy livelihoods, drive down wages and harm the environment in all three countries.  People in the United States, Mexico and Canada deserve a comprehensive NAFTA replacement that provides real relief.
Please take action now.

Choosing Democracy: Trump's Fake Trade Deal: The Trump Administration has announced an agreement on Aug. 27,2018,   on some issues of trade between the U.S. and Mexico.  At presen...
Posted by Duane Campbell at 7:38:00 PM No comments:

Trump and the party of Family Values 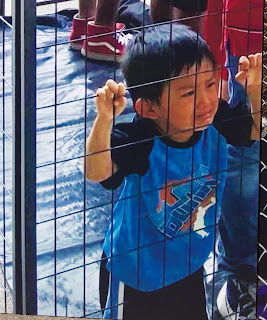 Trump's  administration embraces voter suppression laws, wants to remake the Census to undercount immigrants, is weakening anti-discrimination rules and is pushing for a border wall. Trump uses Twitter to personally attack African-American athletes, journalists and cultural figures.
Second, Trump and his plutocratic henchmen are vastly contemptuous of poor people. Trump has thrown the full might of his administration to destroy government programs that benefit tens of millions of low-income Americans.
The two obsessions are deeply intertwined. For Trump’s base, “poverty” is code for “non-white,” despite the fact that many white Americans are also desperately poor. Trump has mocked “s---hole” countries, and, by extension those black and brown immigrants from those nations. He has labeled inner cities as war zones and many of their residents as “animals,” and has repeatedly attacked immigrants for lack of education and skills, for criminal propensities and for enrolling in public assistance programs to scam hardworking American (read “white”) taxpayers.
For 50 years, Republicans have had the enormous audacity – what my grandparents would have called chutzpah – to label themselves the “Family Values” party.
It was always a political calculus with more than a dose of hypocrisy. But at least there was a time when many GOP leaders did seem to genuinely care for families – whatever their color or place of origin – and to promote the well-being of children.
No more.
Today the Family Values party is led by a serial divorcee who has openly bragged of sexually abusing women, who paid off a porn star and a Playboy model with whom he had affairs and who has made sexually provocative statements about his own daughter.
read  more
https://www.sacbee.com/opinion/california-forum/article217051530.html
Posted by Duane Campbell at 2:12:00 PM No comments:

Midterms: We Must Defeat Trump 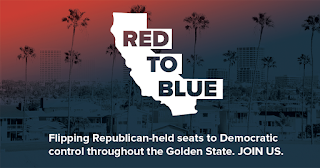 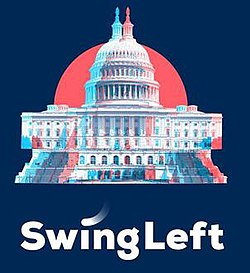 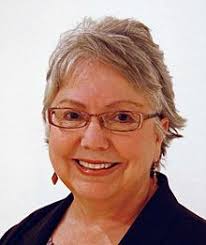 Note: Not the Sacramento Progressive Alliance. However, a potential ally.
Posted by Duane Campbell at 10:58:00 AM No comments:

Democratic Socialism Is On the March—And Neither Pundits Nor Elites Can Stop It
Election pearl-clutching is often related to fears that socialism endangers the wealth and power of America's elites.
BY KATE ARONOFF AND MILES KAMPF-LASSIN [NBC NEWS]
Posted by Duane Campbell at 2:19:00 PM No comments:

https://www.sacbee.com/news/politics-government/capitol-alert/article216839435.html
Posted by Duane Campbell at 2:02:00 PM No comments:

Hundreds of newspapers denounce Trump’s attacks on media in coordinated editorials. NPR:“More than 300 news publications across the country are joining together to defend the role of a free press and denounce President Trump’s ongoing attacks on the news media in coordinated editorials publishing Thursday, according to a tally by The Boston Globe. The project was spearheaded by staff members of the editorial page at the Globe, who write, ‘This relentless assault on the free press has dangerous consequences. We asked editorial boards from around the country – liberal and conservative, large and small – to join us today to address this fundamental threat in their own words.’ Editorials are typically written by opinion writers and are considered separate from organizations’ news coverage. NPR, for example, has a separate ‘opinion’ category. Trump made bashing the news media — ‘horrible, horrendous people’ — a staple of his candidacy and a constant throughout his presidency.”
Posted by Duane Campbell at 11:06:00 AM No comments:

Remember the tax scam that the Trump administration and their Republican allies jammed through late last year? The one that was supposed to "help working families," and "provide relief for the middle class"?
The evidence is here -- and it proves what we've known all along. Here's a chart that shows exactly who is benefiting from this travesty:

That's right: This deficit-busting tax law hasn't done a thing to lift real wages for workers. All it's done is deliver massive gains to big corporations and the ultra-wealthy executives who run them.
It's a scam -- and as more and more Americans catch on, Republicans are starting to distance themselves from what they called a "victory" only months ago.
Posted by Duane Campbell at 4:45:00 PM No comments: 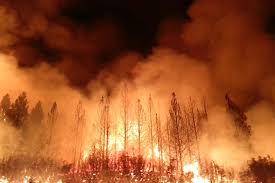 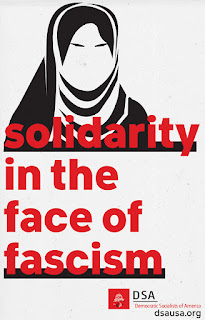 DSA nationally echoes our Charlottesville chapter’s call for solidarity on this anniversary and we urge all of our members to join with organizations working on the ground to stop the Unite the Right rallies planned in Washington and other cities around the country.
One year ago Heather Heyer was murdered and many others were injured and scared by the vicious right-wing attack in Charlottesville. DSA members from Virginia, Maryland, and DC were among those who went to Charlottesville to confront the right, among many other small groups of members, and individuals.
We stand with our chapters who took up the call for solidarity last year, inspired by their memories and bravery.
Since Donald Trump’s election, the fascist movement in our country has grown more bold, drawing energy and support from Trump’s xenophobic comments, but at the core of the Right’s agenda is an old racism. While the South has a special history related to race, we know that racism is rampant throughout the United States and must be confronted everywhere. Racism drives the right, both the alt-right and the 'mainstream' right represented by the GOP in congress. This is no accident. Nixon's Southern strategy has resulted in a GOP populated by racists.
We stand with all people of color, immigrants, and communities attacked by the racist current in our country.
Whether in the streets, by going door-to-door, organizing in the workplace, or even confronting injustice in the home, on this anniversary we urge our members to heed the last words of legendary labor activist Joe Hill --
“Don’t mourn, organize!”
Maria Svart
DSA National Director
The following statement was originally published by Charlottesville DSA on August 9th, 2018.
Read more »
Posted by Duane Campbell at 2:15:00 PM 1 comment:

Robert Reich: The Biggest Threat to Our Democracy (That You Haven't Hear...

Migrant toddler died after release from ICE detention. ThinkProgress: “The American Immigration Lawyers Association confirmed reports on Wednesday that a migrant child died after being released from an Immigration and Customs Enforcement detention center in Dilley, Texas. ‘AILA has learned that a toddler died soon after release from the Dilley South Texas Family Residential Center,”’ Gregory Z. Chen, director of government relations, said in a statement, according to The Washington Post. ‘We do not have information on the cause of death or information that confirms a connection between medical treatment at STFRC and this death.’ The allegations first surfaced Tuesday evening, when Houston-based immigration lawyer Mana Yegani tweeted that a child died ‘as a result of possible negligent care and a respiratory illness she contracted from one of the other children.'”
Posted by Duane Campbell at 9:46:00 PM No comments:

Democratic Socialism Will Prevail: An Interview with Ron Dellums in 1976 - In These Times

Democratic Socialism Will Prevail: An Interview with Ron Dellums in 1976 - In These Times
Posted by Duane Campbell at 7:58:00 PM No comments:

President Trump has made 4,229 false or misleading claims in 558 days - The Washington Post

President Trump has made 4,229 false or misleading claims in 558 days - The Washington Post
Posted by Duane Campbell at 2:55:00 PM No comments: