The Labor Question is Back: 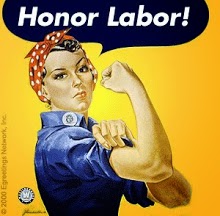 Harold Meyerson,
The Labor Question is back, big-time. The term came into use around the turn of the 20th century; it was a shorthand way of asking: What should be done about the working class’ smoldering discontent in the wake of industrialization? The anger was palpable, made manifest in waves of worker revolts that stretched from the nationwide rail strike of 1877 through the general strikes of 1919.
Not all the battles were fought in the plants and in the streets. Progressive state legislatures in the early 20th century enacted laws setting minimum wages and limiting the hours women and children could be compelled to work; the courts routinely struck them down, and just as routinely short-circuited strikes by imposing jail sentences on strikers.
It was the New Deal, and the rise of unions that the New Deal facilitated, that rendered the Labor Question seemingly moot. In the three decades following World War II, when unions were strong and prosperity broadly shared, the term receded into the history books alongside other phrases – like, say, “slaveholder” – that evoked a dark and presumably buried side of America’s past.

At the core of the problem is the imbalance of economic power, which takes the form of booming profits and stagnating wages. The Financial Timesrecently reported that the share of company revenues going to profits is the highest in many years, which necessarily means that the share going to the main alternative destination for company revenues – employees’ pockets – has shrunk.

Nor is this a short-lived phenomenon brought about by the Republican tax cut. In 2011, the chief investment officer of JP Morgan Chase calculated that three-quarters of the long-term increase in U.S. companies’ profit margins was due to the declining share going to wages and benefits. A study last year by Simcha Barkai, an economist at the University of Chicago’s Stigler Center, found that labor’s share of the national income has dropped by 6.7% since the mid-1980s, while the share of the nation’s income going to business investment in equipment, research, new hires and the like has dropped by 7.2%. Correspondingly, the share of the nation’s income going to shareholders (the lion’s share to the very wealthy, among them the CEOs who are compensated with shares) rose by 13.5%. That shift has put American workers at a double disadvantage, as their wages and the private-sector investment that creates jobs and boosts productivity have both hit the skids.
Like slowly simmering frogs, Americans have required some time to grasp just how dire their situation has become. On Labor Day 2018, however, it’s clear that most of them now realize the need to reshuffle the power structure. A Gallup Poll released on Friday showed support for unions at 62%, the highest level in 15 years, with majority backing from every demographic group except Republicans, and even they are evenly split, 45% to 47%.
The overwhelming public support for striking teachers this spring in such red states as West Virginia, Oklahoma and Arizona was no fluke; another recent poll, this from the venerable education pollster PDK, found 73% support for teachers’ strikes, and a remarkable 78% support from parents of school-age children. The two-to-one rejection of a right-to-work law this summer by Missouri voters is further evidence of a pro-labor shift in public opinion, as are the successful unionization campaigns over the past year of such not-easily-fired workers as university teaching assistants and journalists (including those at such venerable anti-union bastions as the Chicago Tribune and the Los Angeles Times).
As was the case during the years when the Labor Question was first before the nation, the chief instrument the right relies on to diminish worker power is the courts. The Supreme Court’s decision in June in the Janus case, which was meant to reduce the membership and resources of public-sector unions, was just the latest in a string of rulings to advantage corporate and Republican interests. During the past year, however, progressives have put forth some of the most far-reaching proposals in many decades to rebalance economic clout, including bills from two Democratic senators – Massachusetts’ Elizabeth Warren and Wisconsin’s Tammy Baldwin – that would require corporations to divide their boards between representatives of workers and representatives of shareholders.
Since conservatives and business interests began pecking away at the New Deal’s handiwork in the 1970s, class conflict in America has been largely one-sided. On this Labor Day, however, it’s clear that the battle has finally been joined. The Labor Question is before us and remains to be resolved.
Harold Meyerson is executive editor of the American Prospect. He is a contributing writer to Opinion.