Trump's Use of Force is Illegal


he Posse Comitatus Act forbids the willful use of “any part of the Army or the Air Force as a posse comitatus or otherwise to execute the laws.” It has been applied as well to the Navy and Marine Corps. 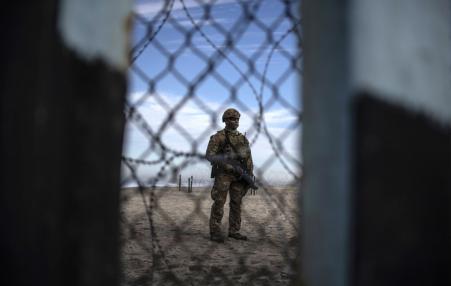 A military serviceman stands guard on the US side of the US-Mexico border fence as seen from Playas de Tijuana, Mexico, on November 16, 2018., Pedro Pardo/AFP/Getty Images

Donald Trump’s decision to send thousands of troops to the US-Mexican border to intercept migrants who intend to apply for asylum is not just a bald-faced political stunt — it is also illegal.


Passed in 1878 to end the use of federal troops in overseeing elections in the post–Civil War South, the Posse Comitatus Act forbids the use of the military to enforce domestic US laws, including immigration laws. For this reason, Trump’s decision to deploy the military to the border to enforce US immigration law against thousands of desperate migrants from Central America — who have undertaken the perilous journey over 1,000 miles through Mexico to the US border in order to apply for asylum — is an unlawful order.


Kathleen Gilberd, executive director of the National Lawyers Guild’s Military Law Task Force, told Truthout, “The deployment of US troops to the Southern border is an illegitimate political ploy and a serious misuse of the military. This action casts shame on a government that treats refugees seeking asylum as enemies.”

The illegality of Trump’s order to the military opens the door to the possibility that service members will resist it: Under the Uniform Code of Military Justice, Nuremberg Principles and Army Field Manuals, service members have a duty to obey lawful orders and a duty to disobey unlawful orders.

Tuesday, December 4
9:30 am
Sacramento County Board of Supervisors
700 H Street, Sacramento, CA
Here's how you can demand Sheriff accountability & transparency in Sacramento County in 2018
Tuesday, December 4:Sheriff accountability and transparency are on the agenda at the Sacramento County Board of Supervisors meeting the morning of Tuesday, December 4. We expect community members will be making public comments for most of the morning so please come and add your voice. RSVP for more info before the event at https://go.peoplepower.org/event/action_attend/18196
Monday, November 26:Although you are not required to attend on November 26 to attend the December 4 event, at our monthly chapter board meeting on Monday, November 26 at 5:45 pm, we will discuss several issues including strategizing our message for Sheriff accountability and transparency. If you would like to attend this meeting, you can get more details and RSVP at https://go.peoplepower.org/event/action_attend/18195

Details of ACLU Problems with the Sacramento Sheriff's Accountability/Transparency:You can see the latest statement of the ACLU position and details about the current need for Sheriff accountability and transparency in Sacramento County by reading this week's Sac Bee Op-Ed from the new senior staff attorney in the ACLU of Northern California's new Sacramento litigation office, titled "Jones wants democracy without transparency. That’s not how it works" at https://www.sacbee.com/opinion/op-ed/article221802185.html
Read more »
Posted by Duane Campbell at 2:19:00 PM No comments:

We changed our country for the better on November 6th, 2018.We elected hundreds of new, diverse representatives and passed ballot measures that will impact thousands of lives right away and in the years to come.But gerrymandering still kept too many voters from having their voices heard. Gerrymandering had an undeniable impact on these midterms. The results in Pennsylvania and North Carolina show exactly what I mean:In Pennsylvania, the state Supreme Court struck down the state's unfair maps, declaring them unconstitutional and ordering them redrawn before the 2018 election.That decision resulted in a fair representation of Pennsylvania voters' choices. On Election Night, Democrats picked up 4 seats in Pennsylvania -- sending 9 Republicans and 9 Democrats to Washington. A result that fits the state.But in North Carolina, where maps have been ruled unconstitutional but weren't redrawn in time for the election, fair representation broke down. Despite winning nearly 50% of the popular vote, Democrats won only 3 of 13 congressional seats.These two states are proof that when gerrymandering goes unchecked, votes don't count the way they should. That's not how democracy should work -- and that's why our fight is just beginning,

From a neighborhood list serve.
Nothing in all the world is more dangerous than sincere ignorance and conscientious stupidity. -Martin Luther King Jr. In today's highly politically-charged environment, and with countless examples of corporate, and government waste and greed it's easy to understand why some people partake in resistive efforts, and in extreme cases taking political "pot shots" against many. SMUD is a customer-owned, public utility. We customers benefit not only from lower costs, but also much from the numerous ways that SMUD "gives back" to improve our community. Believe what you wish and espouse what you may. However, make no mistake about it that the competetive threat to SMUD is real. This threat has been increasing ever since AB 1890 (California Electric Utilty Deregulation) was first introduced in the late 1990's. At that time, the viabilty of SMUD's future existence and it's roughly 30 percent lower residential electricity costs were threatened. SMUD didn't advertise at that time, and laws prevented it. The ENRON scandal stalled it and caused the voting public and many lawmakers to question the move. In efforts to stave off the threat and to position themselves, many utilities diversified and split up factions of their business. We saw the creation of specific and separate entities such as power generation, power contracts, transmission, and distribution create even more fractured subentities. The bottom line is this all ended up in driving up consumer costs. Don't believe me? Let's see if this helps; A single residential customer kwh in the late 1990's was AND expected to slightly go lower in the approximately 3-4 cents range. Look at your bill to see today's cost. Thank you California Lawmakers, NOT! Some things were not broken. Utilities had to restucture rates to prevent competitors "cherry-picking." As an example, Commercial rates were reduced as they had been subsidizing "lower" Residential rates. Our costs further increased.

LOCATION CHANGE!: Sac State remains closed this weekend due to the poor air quality. As a result, we will be moving our Progressive Alliance November Organizing Meeting to Paul & Leisa's house on Cameron Park Lake: 3025A Cambridge Rd., Cameron Park 95682. Hope you can join us! 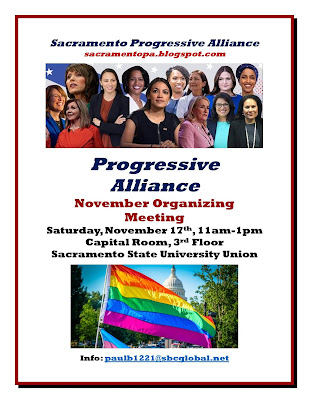 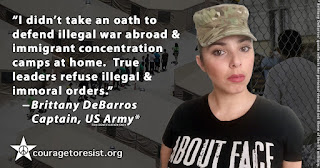 Alexandria Ocasio-Cortez: 'We Have To Keep Organizing, We Can Not Stop' ...

Choosing Democracy: Alexandria Ocasio-Cortez: 'We Have To Keep Organiz...

Choosing Democracy: Alexandria Ocasio-Cortez: 'We Have To Keep Organiz...: DSA's newest Congresswoman In a galvanizing victory speech to an electrified crowd of admirers, Ocasio-Cortez waved away the l...
Posted by Duane Campbell at 5:03:00 PM No comments: 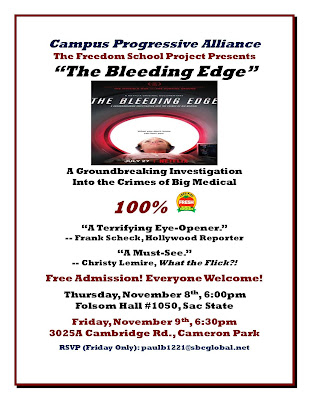 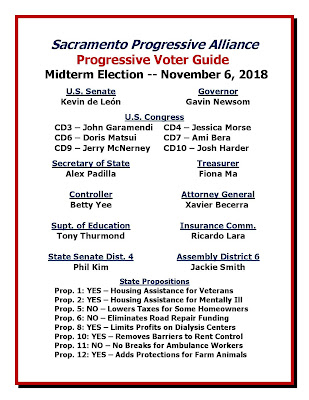