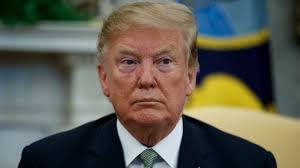 Roque Planas;
President Donald Trump offered a broad outline of his administration’s new dead-on-arrival immigration plan Thursday, seeking to rake in more money for border enforcement while restricting family-based migration and upping the number of visas for skilled workers.
“The Democrats are proposing open borders, lower wages and frankly lawless chaos,” said Trump in a speech from the White House Rose Garden. “We propose an immigration plan that puts jobs, wages and the safety of American workers first.” He outlined a “Build America Visa,” which would prioritize younger workers as well as those with valuable skills and offers of employment.
But the plan is likely to go nowhere.
The proposal, which has yet to be filed as legislation, combines elements of reform long advocated by immigration hard-liners like White House adviser Stephen Miller and U.S. Sen. Tom Cotton (R-Ark.), who rail against both the rising levels of unauthorized migration and the way the legal immigration system is structured. It is also the product of White House adviser and Trump son-in-law Jared Kushner’s attempts to broker a compromise on one of the most vexing issues Congress has faced over the last decade.
The effort at compromise didn’t extend to Democrats, who control the House of Representatives and hold enough seats in the Senate to block legislation. Some have already dismissed the proposal, which lacks protections for so-called Dreamers who came to the U.S. as kids. Sen. Richard Blumenthal (D-Conn.) said the failure to include Dreamers makes it “pretty much a nonstarter.” Plus, Democrats and have little incentive to cooperate with Trump ahead of the 2020 elections, which could give them a shot at broader immigration reform.


This is not the administration turning over a new leaf and deciding they want to get serious about fixing our immigration system. said Tom Jawetz, the vice president of immigration policy at the progressive group Center for American Progress. “And there’s no one who’s going to be inclined to believe that.”
Trump has insisted he wants to help Dreamers, but ended a program to protect them, Deferred Action for Childhood Arrivals (DACA), and previously proposed granting them legal status only in exchange for border wall and major legal immigration cuts. This time, White House press secretary Sarah Huckabee Sanders saidThursday morning that Dreamer protections were too “divisive” to be included.
“That’s one of the things that seems to divide people very quickly and was left out on purpose,” she told reporters.
ASSOCIATED PRESS
Dreamer advocates consider the omission a sign that the White House doesn’t see helping them as a priority. “This proposal shows a callousness towards immigrant youth [and families],” said Sanaa Abrar, advocacy director at the immigrant youth organization United We Dream. “Their game plan from the beginning has been to deport members of our community.”
Even before the rollout, both reporters and some Republican politicians had begun to frame the plan as a way to rally the GOP behind a set of principles rather than push a bill through Congress. Sen. Lindsey Graham (R-S.C.), who has worked on bipartisan attempts to reform immigration in previous years and chairs the Senate Judiciary Committee, where immigration legislation typically gets its first hearing, said Thursday that the “White House proposal is not designed to become law,” according to CNN.
“If it doesn’t get bipartisan support, there’s no chance,” Sen. Chuck Grassley (R-Iowa) said. “But we’ll work to get bipartisan support.”
Jawetz called the proposal “a huge nothingburger,” saying it contains nothing that would actual solve the country’s immigration problems.
America’s current system of immigration allows family members to sponsor relatives for immigrant visas, which account for about 65% of immigration visas issued annually, according to the National Immigration Forum. The priority on family unification was set into law with the Immigration and Nationality Act of 1965, but the trend has existed for most of U.S. history. Members of Trump’s own family emigrated to the U.S.to reunite with family members.
Under Trump’s proposal, however, the legal immigration system would reserve some 60% of immigrant visas for applicants with higher levels of education or job skills the administration views as desirable, according to The New York Times. Those seeking entry would also have to demonstrate English language fluency and pass a civics test.
They are willing to throw away immigrant families by ripping them apart and getting rid of family immigration.Amanda Baran, Immigrant Legal Resource Center.
House Speaker Nancy Pelosi (D-Calif.) called the idea of a “merit-based” immigration system “condescending” in a press conference Thursday morning. “Are they saying family is without merit?” she asked. “Are they saying that most people who have come to the U.S. in the history of our country are without merit because they don’t have engineering degrees?”
While the move away from family-based immigration and the lack of a DACA fix alienates Democrats, it’s unclear whether the shift in the legal immigration system goes far enough for the most hard-line conservative voices who have influenced Trump.
The concept of limiting family-sponsored immigration already has traction among some conservatives who aim to restrict both authorized and unauthorized migration. But the RAISE Act, proposed by Cotton and Sen. David Perdue (R-Ga.) in 2017 with Trump’s endorsement, would have slashed the total number of immigration visas by about 50%.
The plan floated by Trump, on the other hand, would keep the overall number of migrant visas issued each year intact, according to preliminary reports.
The lack of total cuts to legal immigration led Center for Immigration Studies Director Mark Krikorian, a well known advocate for reducing all forms of immigration, to call the plan “out of touch with the president’s base,” in a piece for the National Review.
Trump rose to political prominence by sounding the alarm over a crisis at the border at a time when illegal crossings stood at their lowest levels since the early 1970s. But on his watch, unauthorized crossings have skyrocketed, largely because of an uptick of Central American families and children who often seek asylum and cannot be swiftly deported.
And his administration has been criticized for its cruel treatment of this group, from separating nearly 3,000 families to detaining children for record amounts of time. On Wednesday a 2 ½ -year-old migrant toddler died after being detained by Border Patrol, making him the fourth minorto die over the past six months while in government custody.
Political leaders from both parties agree that the situation at the border amounts to a “crisis,” though Republicans have tended to frame it as an assault on law and order, while Democrats describe it as a humanitarian problem. Either way, the plan offered Thursday does little to address it.
Trump’s proposalto stem the flow of immigrants at the border includes plans to screen out “meritless” asylum claims. And while he didn’t elaborate on specifics, he highlighted a proposal by Sen. Lindsey Graham (R-S.C.) that would increase detention times for families and enable immigration officials to send unaccompanied children from Central America back to their home countries.
Advocates say neither of these changes will be effective deterrents and that the “merits-based” system reveals the Trump administration’s inhumane attitude toward asylum-seekers.
“This is a family values party,” said Amanda Baran from the Immigrant Legal Resource Center. “[Yet] they are willing to throw away immigrant families by ripping them apart and getting rid of family immigration.”
Igor Bobic contributed reporting.
Do you have information you want to share with HuffPost? Here’s how.
BEFORE YOU GO