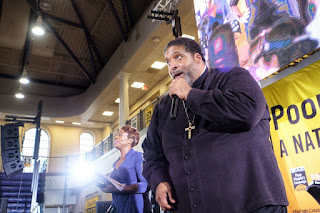 This is the kind of moral fusion organizing that can sway elections and build lasting change. And with coverage on MSNBC, The New York Times, The Hill, ThinkProgress, The Nation, Vox and more, this Campaign is breaking through and we are being heard.
With so much at stake, we must keep the political spotlight on poverty. At the presidential candidates forum, we asked each candidate whether they would commit to a presidential debate on the five interlocking injustices. They all said yes. And then today the House Budget Committee acknowledged that poverty is a serious issue in this country. Let’s hold them—and every 2020 presidential candidate—to their word.
Sign your name to demand the Democratic and Republican National Committees hold at least one LIVE televised 2020 presidential debate that focuses on the five interlocking injustices of systemic poverty, racism, ecological devastation, the war economy and religious white nationalism.
SIGN THE PETITION 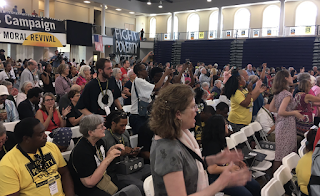 What we’ve done over the last three days proves that the poor are not a small, pigeonholed or easily ignored group. We are building the kind of power that, as Rev. Dr. Martin Luther King Jr. said in 1967, could make the power structures of this country say yes—yes to voting rights, yes to health care, yes to good jobs and living wages, yes to welfare, housing, water and food, yes to peace—when they may be desirous of saying no.
The Poor People’s Moral Action Congress was just the beginning. The Campaign will be returning to D.C. next June for a massive march on Washington and will be holding events all over the country to make sure we confront the unjust structures in our country and build something better in their place.
We did something bold and loud because we had to. Now, we must keep pushing. Sign our petition demanding the DNC and RNC hold a live 2020 presidential debate on systemic poverty, racism, ecological devastation, the war economy and religious white nationalism.
Forward together, not one step back,
Reverend Dr. William J. Barber II and Reverend Dr. Liz Theoharis President of Repairers of the Breach & Director of the Kairos Center Co-Chairs of the Poor People’s Campaign: A National Call for Moral Revival
Posted by Duane Campbell at 10:52:00 AM