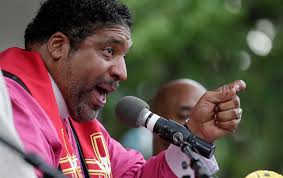 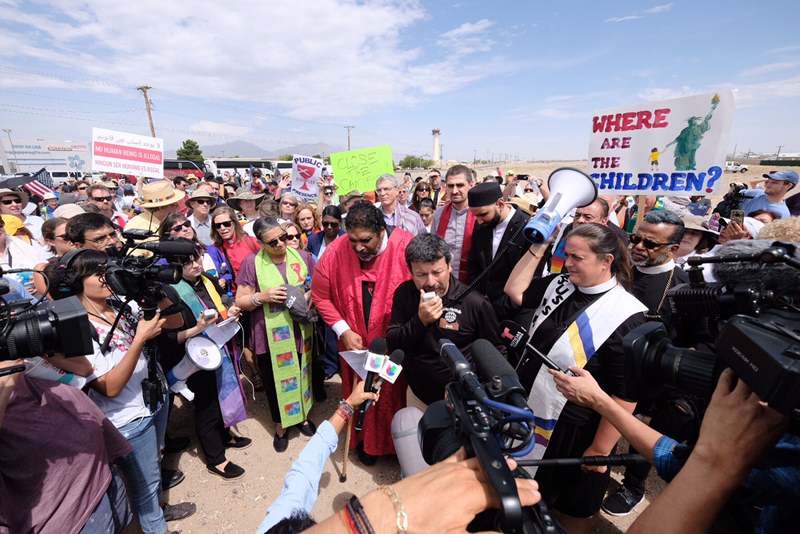 In reflecting on these outbreaks of violence, our hearts are broken. This moment demands a moral reckoning with who we are and who we want to become as a nation.
The truth is that, while every generation has worked to push us toward becoming a more perfect union, we have also tolerated lies that beget violence. America’s founding fathers spoke of liberty, while drafting documents that called Native Americans savages, accepted the enslavement of Africans, and ignored the voices of women. This hypocrisy created space for slaveholder religion to bless white supremacy, pseudo-science to justify eugenics, a sick sociology to pit people against one another, and predatory policies to scapegoat non-white immigrants and blame poverty on the poor.


Politicians who try to denounce the racism of an individual, but do not denounce racist policies refuse to deal with the depths of the problems we face. We cannot address the violence of white nationalism without stopping the policies of white nationalism and the lies that are told to justify them. In 1963, George Wallace began to spew racist rhetoric from the governor’s office in Alabama. By the end of that year, Medgar Evers was dead, four girls in a church were dead, and a President was dead because these words and these policies were a breeding ground for violence. It always has been that way. Whenever we've had these words and policies, they have also unleashed this kind of violence.
For this reason, we call on President Trump, Members of Congress and Presidential Candidates, our people on the ground in movements and communities of struggle, people who have embraced the lies of white nationalism, and our religious leaders and people of faith and conscience to revive the heart and soul of this country.
Mr. President, we recognize that you are a symptom of our decaying moral fabric and you have ignited a modern day wildfire. The coals of white nationalism are always smoldering in our common life, and they have fueled the violence of indigenous genocide, slavery, lynching and Jim Crow. Stop stoking the fires of violence with racist words and policies. Mr. President, you must repent in word and deed if your leadership is to bring us together, rather than tearing us apart.
To Members of Congress and our elected representatives, we ask you to ensure our domestic tranquility. You can take immediate action to stop the President’s racist attacks on immigrants. You can act to ensure voting rights, pass gun reform to keep weapons of war out of our communities, end federal programs that send military equipment to our local and state police departments, pass immigration reform that allows us all to thrive and build up the country, ensure good jobs and living wages and relief from our debts, and guarantee health care and social programs that meet our needs. The lies of white nationalism have prevented action on all of these issues, and those who have enabled the President or remained silent are culpable.
As you return to Washington D.C., we call on Congress to honor the August 28 anniversary of the March on Washington and the murder of Emmett Till by passing an Omnibus Bill that offers a comprehensive response to the systemic racism that connects the issues facing 140 million poor and low-wealth people in this country.
To all candidates running for President in 2020, we call on you to address both the violence of racism and the policies of racism and white nationalism in the public debates. We ask you to connect these policies of systemic racism to poverty, ecological devastation, the war economy, militarism and a distorted moral narrative that accepts, justifies and perpetuates systemic violence.
To our movements and organizations on the ground, do not go back to your silos; instead we must build a moral fusion movement. We have been organizing in separate streams, often along lines of race, issue area or geography, but we need much more than our own fights can win. This is not the time to become entrenched in those divisions. We need to come together across race, gender, sexual orientation, religion, issue, geography and other lines of division to make a fight for everything we need and make sure we are all in — nobody is out.
To those who have embraced the lies of white nationalism and racism, we humbly recognize the power of fear. We live in a time when many people do not know if they will have work today or health care tomorrow. Many families do not know what agency is coming for them or their children. We do not know who to trust and have been left to fend for ourselves and whoever we believe to be on our side. Let us find strength in our pain, mourn our losses, and remember that we are all part of a common human family. Let us reject every attempt by politicians and corporate interests to pit us against one another. Let us confess that white nationalism is a myth that has not served most people, even those it claims to protect. Let us fight for each other and for a world where everyone can thrive.
To our religious leaders and people of faith, we call on you to offer moral leadership in the public square. If you have condoned the lies of white nationalism or remained silent, you have failed to keep your sacred vows. We ask you to recall the struggles of our ancestors so we can work together to build up a more perfect union in our common life.
We call on all people of faith and conscience to sign on to this letter and share it throughout your networks. Let us prevent this violence from defining who we are as a nation and people.
SIGN THE LETTER