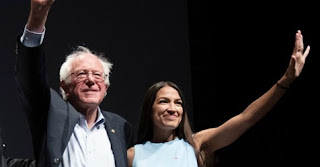 Ocasio-Cortez and Omar endorse Bernie and the political revolution
In a watershed moment in our movement for economic, environmental, racial, and social justice, Democratic Socialists of America (DSA) member Alexandria Ocasio-Cortez of New York and fellow congresswoman Ilhan Omar of Minnesota are endorsing Senator Bernie Sanders for president. DSA member Rashida Tlaib of Michigan is expected to endorse as well.
For decades, Bernie has taken on the wealthy and ruling elite with his call for a political revolution. This call has inspired millions. Since his 2016 presidential campaign, we’ve witnessed the skyrocketing growth of DSA, a surge in the popularity of democratic socialism and policies like Medicare for All, a strike wave of teachers and other workers, and the groundbreaking electoral wins of democratic socialist Reps. Ocasio-Cortez and Tlaib and allies like Rep. Omar.
Only a movement made up of millions fighting for a political revolution can beat Trump next November and take on the existential threat of climate change and historic levels of global inequality.
In last night’s Democratic Party primary debate, Elizabeth Warren quipped that she has “no beef with billionaires.”
We do.
Like Bernie — who argues that billionaires should not exist — we know that billionaires are rich because the vast majority of society is poor. Billionaires profit by denying us the healthcare we need. Billionaires profit from privatization, which has destroyed public schools across the country and poisoned the water in Flint. Billionaires profit from mass incarceration, detention, and endless wars. Billionaires profit from the fossil fuels causing climate catastrophe. To keep getting richer, billionaires invest their money in elections to make sure that politicians of both parties protect their profits.
All of the Democratic candidates, except for Bernie, claim we can fix capitalism. But capitalism is working just as it is meant to: those who have the wealth, who own the companies and reap the profits, have all the power. Meanwhile, those who work in those companies and produce the things that make profit have almost no say over our lives or our political system. But when workers organize and fight back, we can take power and begin to build a world that puts people over profit. We should have control over our own lives — we deserve a democratic socialist world.
Backed by a diverse, energetic working-class movement and by democratic socialist politicians like Tlaib and Ocasio-Cortez, Bernie Sanders can win the Democratic nomination, beat Donald Trump, and, together, we can transform politics in this country and around the world forever.
Sanders’s political revolution has lasting momentum. After the election, Democratic Socialists of America will continue building this movement and fighting with workers for Medicare for All, a Green New Deal, College for All, Housing for All, to abolish ICE, and for an end to mass incarceration at home and imperialism abroad. We are committed to building a fighting, democratic labor movement from the bottom up, and supporting workers on strike, from GM autoworkers to Chicago public school teachers.
Join DSA, and together we can bring to birth a new world from the ashes of the old.