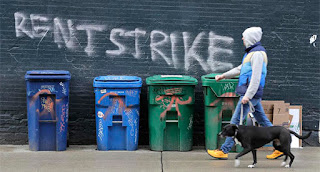 There was going to be a reaction to this one way or the other. It has burst forward in a series of May Day rent strikes. As my colleague Harold Meyerson points out, rent strikes are usually hyper-local affairs, usually emanating from one building or group of building protesting one landlord. And I’ve seen some of that, particularly in Elmhurst, Queens. But this is “what may likely be the first nationwide rent strike in our history.” And it’s being driven by mainline-ish progressive groups, not the Communist Party.
The Center for Popular Democracy, the Action Center on Race and the Economy (ACRE), and many others are coordinating events today. Even a member of Congress, Democratic socialist Rashida Tlaib, endorsed the actions. “When elected officials say we need to get back to normal, we must remember that realities like this are not normal,” Tlaib said in a statement. “We need to invest directly in people.”
Event plans include banner drops, motor marches (where people stay in their cars and parade through downtowns), and a “cacerolazo,” a protest popular outside the United States that involves the banging of pots and pans (cacerolazo is Spanish for “casserole.”) By one count, over 200,000 households have affirmatively joined the rent strike, though the number of people not paying rent will undoubtedly be much higher. “I’m not paying May rent—not because I don’t want to, but because I can’t,” said Winsome Pendegrass, a tenant involved with the progressive New York Communities for Change.
Strike hubs include California and Washington, D.C. The demands are rent and mortgage cancellation and a moratorium on evictions and foreclosures for the duration of the crisis. There are some federal protections against eviction, but they are being violated in the states.
Rent and mortgage strikes aren’t the only things happening on May Day. Amazon, Whole Foods, and Instacart workers (along with workers at some other big firms) are striking today, as close to a general strike as we’ve seen in decades. We have a piece at the Prospect website today about how tech workers at Amazon are showing solidarity with their blue-collar bretheren; two were even fired for speaking out. They are protesting working conditions that have made so-called “essential workers” vectors for the spread of the pandemic. Many are calling out sick or walking out during lunch. This raised consciousness is spreading. Meat processing workers are saying that they won’t go back to their plants if compelled by President Trump’s executive order (which doesn’t exactly compel the plants to re-open).
Posted by Duane Campbell at 2:21:00 PM