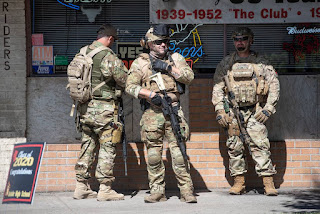 The Civil War That Never Ended. Today, in a superb column, my colleague Bob Kuttner writes of how our nation has descended into a kind of civil war, whose front lines are those of the protesters confronting the police. In its current form, this conflict has been building ever since the Republicans became the party of the white South, in a historic switch inaugurated by Barry Goldwater’s vote against the Civil Rights Act in 1964 and his nomination later that year as the Republicans’ candidate for president.

In the Prospect’s pages, I’ve been comparing our condition to the Civil War for quite some time—finding similarities to the Confederacy in the Republicans’ current war on black voting; noting the echoes of the antebellum South’s drive to extend slavery into the free states in the spread of right-to-work laws from Southern states to Northern ones—Wisconsin, Michigan, Indiana—when they fell under Republican rule during the past decade; and equating the efforts of city and state governments under Democratic control to create sanctuaries where undocumented immigrants could be safe from ICE arrests to the efforts of Northern cities to hinder the seizure of former slaves and free blacks by Southern “slave hunters” under the Fugitive Slave Act.

Now, the video showing Minneapolis cops murdering George Floyd seems to have had a political effect somewhat akin to the South’s unprompted attack on Fort Sumter, which enraged the North and propelled the nation into open civil war. What united the North was not only an immediate sense of outrage, but also a sense that by the nation’s breaking apart, the very idea of a democracy would be threatened (that’s pretty much what Lincoln said at Gettysburg). Also uniting the North was a long-simmering anger at the South’s dominance of the federal government and its policies—a belief held even by many white Northerners not yet committed to emancipation.

Today, rather than seeing the murder of George Floyd as some outrageous one-off, the vast majority of Americans see it as a continuation of a national pattern of racist and brutal policing. A number of polls, including one in today’s Washington Post, reveal a public that has clearly been moved—even mobilized—to actions that curtail racist practices. According to the Post, 69 percent of the public see the murder as part of a broader pattern, 74 percent support the protests, while just 10 percent blame the protesters for the violence that occurred in the protests’ wake (14 percent blamed the police, 66 percent blamed “other people acting irresponsibly”). Fully 61 percent disapprove of Trump’s response to the protests, while just 35 percent approve it—a figure that reveals even some cracks in the Republican base.

So add to my friend Bob’s observation that we’re engaged in another civil war one further observation: As in 1861 (and 1865), a clear majority of Americans are with us. Today, they view Trump and Trumpism, as 1861 Americans viewed secession, as a threat to democracy itself. Today, a majority favors ending Trumpian and Republican (which is to say, white Southern) rule, as 1861 Americans favored an end to the slaveocrats’ control of the government.

To which all I can add is: To the barricades—not just the streets, but the voting booths (well, voting booths by mail) come November!

The Eight-Wheel Classic - TITIAN Arts
The eight-wheel classic bicycle is available in six sizes. The Bicycle ford fusion titanium Wheel is a classic bicycle made in 바카라 사이트 USA, but https://tricktactoe.com/ there casinosites.one are three variations in worrione