'It's the Filibuster or Democracy,' Say Progressives After GOP Tanks January 6 Commission

'It's the Filibuster or Democracy,' Say Progressives After GOP Tanks January 6 Commission
Posted by Duane Campbell at 2:01:00 PM No comments: 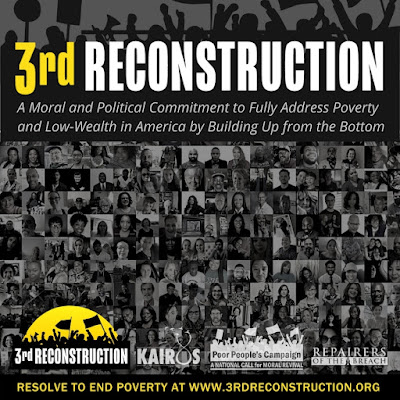 Rev. Barber. The Third Reconstruction and the Common Good

Dr. Barber is the president of Repairers of the Breach and a co-chair of the Poor People’s Campaign. Mr. Wilson-Hartgrove is the author of “Revolution of Values: Reclaiming Public Faith for the Common Good.”

In Elizabeth City, N.C., the morning after a jury in Minneapolis found the former police officer Derek Chauvin guilty of the murder of George Floyd, a unit from the county’s Sheriff’s Department dressed in tactical gear arrived at the home of Andrew Brown Jr. They were there to serve drug-related arrest and search warrants.

Within minutes, 42-year-old Mr. Brown was dead, shot at the wheel of his car. He was hit by five bullets, including one shot to the back of his head. The North Carolina prosecutor in the case has called the shooting “justified.”

If George Floyd forced America to face the question of whether an officer who abuses power can be held accountable, Andrew Brown Jr.’s blood cries out from the ground of eastern North Carolina for deeper change. Justice demands systemic and enduring transformation — something that younger generations will see and trust as authentic. We call it the Third Reconstruction.

Consider our recent history, starting with Mr. Chauvin’s trial. For us, it brought back memories of the summer of 2013, when a jury in Florida found George Zimmerman not guilty of the murder of Trayvon Martin. Mr. Zimmerman had shot and killed the 17-year-old boy who was guilty of nothing more than walking while Black in a gated community. Our legal system’s failure to hold Mr. Zimmerman accountable for killing Mr. Martin sparked the Black Lives Matter movement. It rallied a generation of young people who refused to accept white police officers regularly killing unarmed Black people, not unlike how white Americans regularly lynched Black Americans in the early 20th century.

And that moment — the rise of Black Lives Matter — in turn recalled the movement galvanized by the death of Emmett Till, a 14-year-old boy from Chicago, who was murdered with impunity in Jim Crow Mississippi. The horror of his lynching inspired a generation of children who looked like Till to confront a system that denigrated their Black lives and undermined democracy. Over the next decade and a half, they grew up to be the college students and young adults who led sit-ins at lunch counters, organized Freedom Summer in Mississippi, petitioned their fellow Americans to see voting rights as a moral issue at Selma and built a Rainbow Coalition in Chicago to advocate the dignity of all poor people.

The reckoning that Emmett Till’s generation demanded took time — and it was subverted and sabotaged at every turn. But the young people who saw themselves in Till eventually contributed to a Second Reconstruction of America in the mid-20th century, expanding democracy and pushing the nation toward the promise of a government that would represent all of its citizens.

Now the Trayvon Martin generation has come of age and is pushing the nation toward a Third Reconstruction. The death of Mr. Floyd, along with those of Breonna Taylor and so many more who’ve joined the litany of lives taken, marked a turning point in the movement: His cries of “I can’t breathe” united this generation in a collective gasp for justice.

But what does that justice look like? Accountability for Mr. Floyd’s murder is not justice. If we cannot stop the killings of unarmed Black people before they happen, any collective affirmation of Black life rings hollow.

As hard as it may be to achieve, the Third Reconstruction is about more than Black people surviving encounters with law enforcement. It’s about America taking steps to protect and value its Black citizens as it has never done before. A Third Reconstruction is about ensuring Black Americans are no longer twice as likely as white Americans to die in a pandemic. It’s about remaking a system that saddles them with student debt and then offers them poverty wages.

A Third Reconstruction will ensure that all Americans can access decent housing for their families and quality education for their children, as outlined in a resolution introduced Thursday by Representatives Barbara Lee and Pramila Jayapal, and supported by our organization, the Poor People’s Campaign. Their resolution seeks to ensure all Americans access to clean and unleaded waterand, in the face of widespread voter suppression efforts, a guarantee that their participation in American democracy is expanded and protected.

The Third Reconstruction is about confronting policies and practices that produce death, whether from police killings, poverty, lack of health care, ecological devastation or unnecessary war. It is, in short, a declaration that unnecessary death is intolerable and that democracy is still possible.

In 2020, following a summer of Black Lives Matter protests, we witnessed the most votes cast in a federal election in U.S. history, with a higher percentage of eligible voters participating than we’d seen in decades, and maybe even more than a century. From the Fight for $15 to the Sunrise Movement to the Poor People’s Campaign, this generation has linked up with movements to connect systemic racism in policing with systemic racism in economic inequality, ecological degradation, health disparities and voter suppression. In our work with the Poor People’s Campaign, we saw thousands of Black, white and brown Americans reach out to millions of poor and low-income neighbors like them, encouraging them to join a movement that votes for a transformative agenda in our public life.

To 'End the Absurdity' of Wasteful Military Spending, Sanders Introduces Bill to Audit the Pentagon

To 'End the Absurdity' of Wasteful Military Spending, Sanders Introduces Bill to Audit the Pentagon
Posted by Duane Campbell at 7:44:00 PM No comments:

The Los Angeles Times had the story Wednesday of the tumultuous scene in Redding, California, the largest city in Shasta County and the scene of months of simmering tensions over state public health orders.

The angst has taken the form of an effort to recall three county commissioners who supported COVID-19 restrictions. But it has taken more violent forms as well.

Most recently, supporters of the recall effort are accused of accosting one a local gadfly — a comic who’s skewered the recall online.

“They’re all just bullies, you know,” the comic, Nathan Pinkney, told the Times of his aggressors. “They’re all so sensitive and volatile.”

Pinkney’s main foe, and the focus of the Times’ report, is a local man and militia group member named Carlos Zapata. Zapata (pictured above) is accused of throwing a drink at Pinkney on May 5 after spotting him at a restaurant where Pinkney worked in Redding. Later that night, police say, an acquaintance of Zapata’s punched Pinkney and held a large CO2 bottle at him in a “threatening manner” before leaving the area.

Zapata denied to the Times that he personally laid a hand on Pinkney, and said that as a bar owner, he saw fights “eight times a night” that didn’t make the news.

How to Stop Republicans From Stealing Elections | Robert Reich

Email ThisBlogThis!Share to TwitterShare to FacebookShare to Pinterest
Labels: Voting

100+ Groups Launch Nationwide Campaign to Combat GOP Assault on Democracy
Posted by Duane Campbell at 11:48:00 AM No comments:

Choosing Democracy: Sacramento City USD Fails English Learners:  The Education Committee of LULAC/Sacramento has recommended for over 4 years that the funds allocated to Sacramento City Unified School Dis...
Posted by Duane Campbell at 3:45:00 PM No comments: