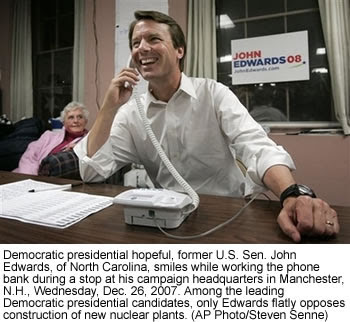 by John Nichols
Published on Monday, December 31, 2007 by The Nation
The news that singer John Mellencamp will cap the Iowa caucus campaign of John Edwards has not provoked the media frenzy that accompanied Oprah Winfrey’s Des Moines tarmac tap on behalf of rival Democrat Barack Obama.
For this, Edwards should be thankful.
Obama has been stalled in the Iowa polls ever since Winfrey visited the state on his behalf early in December. In contrast, national front-runner Hillary Clinton, who fumbled repeatedly in November and early December, and Edwards, who had been written out of the race by some pundits, have regained their positions.
Obama misread Iowa. He bet on style over substance in a state where activist Democrats take seriously the definitional role their play in the nominating process. The senator from Illinois, who had so much momentum at the beginning of December, calculated that the Hawkeye state might be locked up by a recommendation from a multi-media persona whose entry into presidential politics came off a little like the launch of a new “project.”
That does not mean that Obama should be counted out in Iowa. He has spent more money than the other candidates on slick TV ads, he has hired some of the best caucus strategists and his campaign is tossing every charge and claim it can muster into a drive to blunt the momentum that has belonged to Edwards since he dominated the last pre-caucus debate between the Democratic contenders.
But, despite his many advantages, the Illinoisan could well finish behind Edwards.
That’s because the 2004 Democratic nominee for vice president has waged a dramatically different campaign than Obama’s feel-good effort. Where Obama has run the softest sort of campaign, Edwards is mounting a edgy, muscular effort that owes more to the memory of Paul Wellstone or the sensibilities of Ralph Nader than to the smooth triangulations of Bill Clinton or the not-so-smooth compromises of John Kerry.
Edwards has fought his way back into contention with aggressively populist positions, anti-corporate rhetoric and a campaign that eschews glitz for grit. Necessarily, the former senator from North Carolina opts for a different sort of celebrity than the other contenders.
So it is that Mellencamp will come to Iowa Wednesday to close the Edwards campaign off with a “This Is Our Country” rally at the not-exactly-Hollywood Val Air Ballroom in West Des Moines. (In case anyone is missing the point here, they will be distributing the tickets from the United Steelworkers Local 310 hall.)
Where Winfrey brought a big name but little in the way of a track record on the issues that are fundamental to the rural and small-town Iowans who will play a disproportional role in Thursday’s caucuses, Mellencamp is more than just another celebrity taking a lap around the policy arena.
For a quarter century, the singer has been in the thick of the fight on behalf of the rural families he immortalized in the video for “Rain on the Scarecrow,” his epic song about the farm crisis that buffeted Iowa and neighboring states in the 1980s and never really ended.
Mellencamp has not merely sung about withering small towns and farm foreclosures. As a organizer of Farm Aid, he has brought some of the biggest stars in the world to benefit concerts in Iowa and surrounding states, and he has helped to distribute the money raised at those events to organizations across Iowa.
Farm Aid is nonpartisan. It’s not endorsing in this race. But Mellencamp is. The singer, who this year will be inducted into the Rock and Roll Hall of Fame but whose music remains vital enough to have earned a 2008 Grammy nomination for Best Rock Vocal Performance, was lobbied for support by other campaigns, especially Clinton’s. But he has a long relationship with Edwards. He has an even longer relationship with the issues that Edwards is talking about. Indeed, his credibility is grounded in the recognition that Mellencamp has repeatedly taken career-risking anti-war, anti-racist and anti-poverty stances that other celebrities of his stature tend to avoid.
What matters, of course, is the fact of that credibility — and the fact that it is so closely tied to the farm and rural issues that have meaning even in the more urbanized regions of Iowa. That is why, if there is an endorsement that is going to have meaning with the people who drive down country roads to attend caucuses on what looks to be a very cold and unforgiving Thursday night, it is likely to be that of the guy who proudly sings that, “I was born in a small town…”
John Nichols’ new book is The Genius of Impeachment: The Founders’ Cure for Royalism. Rolling Stone’s Tim Dickinson hails it as a “nervy, acerbic, passionately argued history-cum-polemic [that] combines a rich examination of the parliamentary roots and past use of the ‘heroic medicine’ that is impeachment with a call for Democratic leaders to ‘reclaim and reuse the most vital tool handed to us by the founders for the defense of our most basic liberties.’”
Posted by Paul B at 11:32:00 AM