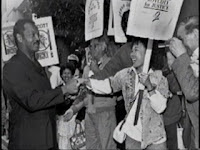 [Editor's Note: Like my comrades below, I was inspired by Rev. Jesse Jackson's Rainbow Presidential campaigns of the 1980's, and served on the steering committee of Students for Jesse Jackson at UC San Diego in 1988. However, I see John Edward's populist campaign for economic and social justice as the modern day version of Jesse's progressive rainbow tradition, not Obama's moderate, overly cautious "politics of hope." -- Paul B]
By Eric Mar, San Francisco Schoolboard Member
http://www.edjustice.blogspot.com/
Like longtime electoral and cultural activist Eddie Wong, over 2 decades ago I was inspired by and became a part of the historic Rainbow Coalition campaigns in 1984 and 88. And I too have become active in the Obama '08 campaign with some of the same hopes as we had 20 years ago when our Jesse Jackson for President campaign won some seven million popular votes and registered 2 million new voters.
But most importantly, we used the rainbow coalition campaigns to:
1) Build a broader and more diverse base of support for progressive issues and our movements at the local level
2) Win concrete issues and influence public policy from the bottom-up
3) Use the electoral arena more strategically to build an ongoing multiracial organization and to open up political space for grassroots organizations
4) Successfully utilize media access and exposure for mass public education around social and economic justice issues. [For more see Applied Research Center's Multiracial Formations].
I think the intense Rainbow Coalition work of the 1980's also paved the way for many grassroots electoral activists and politicians like me. But the level of grassroots involvement and infrastructure to hold us accountable to our communities is much weaker today.
Though Obama has nowhere near the grassroots field campaign, or progressive vision/politics as Jackson had in the 80's, I believe his campaign gives our movements another historic opportunity, as Wong states, to "build bridges across constituencies and generations" and "for (progressive) change, for hope and for a better America."
Wong, a leader in the Asian American and Pacific Islander Leadership Council for the Obama campaign, comments in his Asian Week commentary The Man And The Moment:
"Twenty years ago, as I stood in the bitter cold in a parking lot in Sioux City, Iowa, I saw a sight I thought I’d never see. A crowd of white meat-packers, big beefy men and their wives and children, shuffled their feet in quiet anticipation. They shielded their eyes against the low winter sun, stamping their feet for warmth on the frozen ground. They were waiting to hear my boss, the Reverend Jesse L. Jackson, a candidate for the Democratic nomination for president of the United States.
"No one knew what to expect from this unlikely meeting of the Southern-born civil rights veteran and these heartland folk who had been on strike for months and were now down to their last savings. As Jackson began to speak, I could see heads nodding as he told them that their sacrifice was redemptive, and that they were not alone in their fight for fair wages and safe working conditions. He took their strike and cast it against the larger economic violence that came out of President Reagan’sunion-busting practices, and the failures of a trickle-down economy that brought wealth to the rich and poverty to the working poor. As Jackson spoke, he ignited a sense of pride and dignity in these men and women. He brought them to their feet with tears in their eyes with the cry, “Keep hope alive!”
"Now, Senator Barack Obama is standing with the workers, farmers, students, elderly and others in Iowa, preaching a similar message of hope and offering a new way forward for our country. Just as Jackson offered a break from Reaganomics and repression, Obama would take us away from the destruction of Bush’s war policies and restore our democracy. Just as Jackson offered a message of hope across racial and class divides, Obama is building a bridge across generations and constituencies.
"Obama is the new messenger of hope, justice and equality. His call for ordinary people to take back their government from the lobbyists and big business clients, who have reaped mega-profits through backroom deals, is exactly what we need at this critical moment when economic inequality is at an all-time high. His pledge to engage directly with foreign leaders who oppose us and with allies who should be our partners in solving intractable conflicts is exactly what we need. We need to build bridges and tear down walls.
"This moment in United States history poses a turning point that can set the coursefor decades. The crises posed by global warming, a protracted struggle against Islamic extremists, the deepening inequality in our country, our deteriorating infrastructure and declining educational system, and our tarnished international reputation cry out for new answers and new approaches. Obama is the best person to meet the challenges of this historical moment. He has shown a deep grasp of issues and, more importantly, exhibited the ability to listen to other points of view and find ways to build alliances across historic barriers.
"Obama is the man with the vision, clarity and ability to meet the challenges of our times. He is the man, and this is the moment — for change, for hope, for a betterAmerica."
Eddie Wong is a member of the Asian American and Pacific Islander Leadership Council for Senator Obama. He was the national field director of the 1988 Jesse Jackson for President campaign. He is a media and political consultant based in Oakland, Calif.
Posted by Paul B at 10:55:00 AM

I really respect Paul's work in so many fields; and others who are working on the Kucinich and Edwards campaigns, esp. for economic justice and structural changes that would hold corporate America accountable to our communities.
But I really think Obama's campaign is the best option right now to build a multiracial coalition and overcome the dominance of the DLC-wing of the democratic party represented by the Clinton campaign.