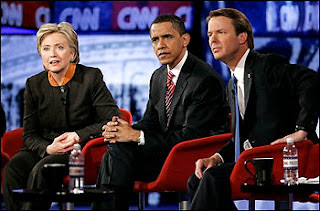 In the edgiest debate of the Democratic presidential race, Barack Obama and Hillary Clinton repeatedly engaged on Monday night in bitter and at times personal exchanges with one another.

And John Edwards effectively pointed to the heated squabbling between the two frontrunners in anticipation of Saturday's South Carolina Democratic primary as a deviation from the issues that matter.

Clinton accused Obama of doing legal work for a Chicago slumlord and charged that her opponent "did the bidding of the insurance companies" when health care was debated in the Illinois legislature.

Obama told Clinton he was fighting to help workers in Chicago when "you were a corporate lawyer sitting on the board of Wal-Mart."

Clinton accused Obama of playing fast and loose with his positions. "Senator Obama, it is very difficult having a straight-up debate with you because you never take responsibility for any votes. That is a pattern," she charged, drawing jeers from the crowd, which generally awarded cheers to the applause lines of the candidates.

Obama complained about "a set of assertions made by Senator Clinton as well as her husband that are not factually accurate" and suggested that the Clintons were generalizing about legislative votes on complex issues to paint a negative picture of him. (Later in the debate, he ruminated about whether he agreed with author Toni Morrison that Bill Clinton was "the first black president." He got a laugh when he said he'd check out the former president's dance steps to see whether he was a "brother." Clinton got her laugh when she replied, "I'm sure that can be arranged.")

Obama returned more than once to his objections regarding Bill Clinton's role in the campaign. Unfortunately, Obama lodged his complaints about the mischaracterization of his record on the same night when he was doing much the same thing.

Noting that Obama had attacked both his foes for votes they had taken, Edwards said, "What you're criticizing her for, by the way, you've done to us."

Obama struggled to explain himself by explaining voting procedures in the Illinois Senate. But it was a tough sell, although perhaps not so tough a sell as Clinton's attempt to dodge a question from Edwards about whether she would bring the troops home from Iraq within a year.

In short order, Edwards had gotten the best of both his opponents. That was the order of the night. Again and again, Edwards took the side of one of the frontrunners against the other, effectively serving as an arbiter between the two.

It was an ideal position for Edwards, the outsider candidate who is struggling to distinguish himself from two opponents with more money and better poll positions.

But the former senator from North Carolina had to fight for it. More than half an hour into the debate in South Carolina, where voters will participate in a high-stakes Democratic primary on Saturday, CNN moderator Wolf Blitzer had presided over what was essential a showcase for Clinton and Obama.

"Are there three people in this debate, not two?" interjected Edwards. The 2004 Democratic nominee then delivered what may have been the most effective soliloquy of the night. Referencing the bitter back-and-forth between his two opponents, Edwards asked, "This kind of squabbling -- how many children is this going to get health care? How many people are going to get education because of this? How many kids are going to get to go to college because of this?"

"I respect both of my fellow candidates," he continued, "but we have got to understand this is not about us personally. It's about what we are trying to do for this country,'

Of course, Blitzer interrupted. But Edwards held his ground. "Let me finish here," he said. "Lord knows, you let them go on forever."

The crowd cheered as loudly as it had for anything said by Obama or Clinton. And even CNN senior political analyst Bill Schneider noticed, saying, "This could be a debate where John Edwards gets back in the game. He's effectively making his points, while Barack Obama and Hillary Clinton are in silly squabbles. Voters have too many concerns to care about Obama and Clinton's political potshots."

Radio commentator Carl Jeffers agreed, explaining that, "There are a lot of Americans who are turned off by this personal animosity between Clinton and Obama and that benefitted John Edwards."

That was certainly Edwards' hope.

"The reality of the race is that I am running against two celebrity candidates who have raised over $100 million each. I'm an underdog, but I'm a serious underdog," the candidate said after the debate, noting that he has won delegates despite a lack of media attention. "I think that people who watched this debate with an open mind were probably impressed."

What is not known, at a point when everyone seems to be taking sides in an increasingly intense fight between Clinton and Obama, is how many people watched this debate with an open mind. There skirmishing between the Clinton and Obama camps may simply solidify support for he leaders. But in this fluid race, did Edwards connect with enough undecided and wavering voters to secure a credible finish in South Carolina's primary? The answer to that question will determine whether John Edwards, who had a good night Monday, will have a good enough night on Saturday in South Carolina to remain the serious player he deserves to be in a race that goes national in two weeks with the February 5 "tsunami Tuesday" primaries and caucuses.
Posted by Paul B at 3:31:00 PM

So who won the squabble between Clinton and Obama during the recent South Carolina debate? No one, though Obama probably hurt himself more. He was the first to sink into personal attack, with a lame slur about her business association with Wal-Mart. But then she missed the opportunity to rise above the cheap shot and linked him to a Chicago slum lord.

I would have expected her to show her statesmanship with something like this: “I refuse to waste a great opportunity to let the public know where all of us stand on issues, so I won’t resort to character assassination. Barack, you’ve inspired your supporters by offering 'change,' optimism and unity across party lines. But you can’t achieve that goal through pouting and schoolyard insults. Now shall we get on to the issues?”

Sadly, she didn’t display her political savvy, though Obama showed that he was more of a Pied Piper than a new messiah. The big winner that day, of course, was Edwards as he claimed to be the one adult on the platform.