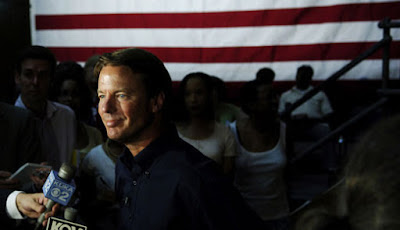 [Editor's Note: Throughout this Presidential race John Edwards has been the only major candidate in either party to seriously campaign for the progressive/left vote. This presents a serious question our movement needs to address: Why should progressives even consider voting for candidates who respect us so little that they don't even bother asking for our vote? -- PB]
By Alex Spillius in Ames, Iowa
Telegraph, United Kingdom, 02/01/2008
John Edwards launched a final, frantic attempt to win the Iowa caucuses, railing against corporate greed and seizing hold of the Left flank of the Democratic Party long abandoned by his two main rivals.
In a year-long campaign, the former North Carolina senator has been largely overlooked by a national media enthralled by the battle between the more glamorous Hillary Clinton and Barack Obama. But within Iowa it has always been a different story.
advertisement
Mr Edwards, who came second in the state in 2004 before becoming John Kerry's vice-presidential candidate, has consistently performed strongly in the polls and, according to insiders from all three camps, could sneak a surprise victory tonight.
His main hope is that the new caucus-goers - women for the former First Lady and young people for the senator aiming to become the first black president - do not turn out in the numbers predicted.
That could see the rank-and-file Democrats who favour his candidacy narrowly in the ascendant.
In his latest appearance on the stump on Tuesday night, Mr Edwards was angry. He was angry about the millions of Americans without health insurance and overpaid US "mercenaries" in Iraq. The next president, he declared, will need to be a "fighter" capable of taking on the vested interests that are throttling the nation's middle classes. If Mr Edwards is that man, the next president of the United States will have the looks of Pierce Brosnan and the rhetoric of Arthur Scargill.
At the first event of the "Marathon for the Middle Class" tour across the Midwestern state, Mac McDonald, a college professor and lifelong Democrat, said he was undecided between Senator Joe Biden, the chairman of the Senate foreign affairs committee currently polling around six per cent, and Mr Edwards. "I might vote first for Biden and then switch," he said. "That might be one way of doing it.
"I believe in Edwards and I believe he cares about real people."
Mr Edwards and his wife Elizabeth were due to have visited 16 locations in the state by last night over 36 hours, including two stops to see supporters after midnight. "We won't be able to sleep a lot, but we'll try to nod off a little bit," he said after speaking to a packed ballroom at the Iowa State University in Ames.
Outside the temperature was well below freezing, but inside the language was fiery. "Corporate greed is destroying the middle class, corporate greed is destroying our children's future," he boomed, while trade agreements were sending American jobs overseas "for the glorification of corporate profit".
The message has a receptive audience in Iowa, which has seen its share of reduced workforces, factory closures and corporate takeovers.
Posted by Paul B at 5:42:00 PM

Show your Support for John Edwards!!!