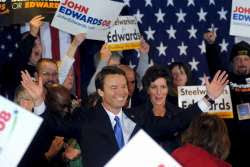 [Editor's Note: Hillary Clinton's third place finish in Iowa Thursday confirms that the era of Clintonism (i.e., pro-corporate, pro-war, DLC centrists dominating the Democratic party) is probably over... thank God! Now the question is whether Clintonism will be replaced by the new centrism of Barack Obama (pro-corporate, making deals with conservative Republicans, etc.) or a genuine progressive populism represented by John Edwards, carrying on the populist traditions of FDR, Bobby Kennedy, Jesse Jackson, and Paul Wellstone. In 1992 most progressives fell for Slick Willie's phony populism. Let's hope we don't make the same mistake by choosing a corporate backed moderate over a genuine progressive. -- PB]
By Jim Tankersley
Baltimore Sun
CONCORD, N.H. – John Edwards has a simple philosophy when it comes to fine-tuning his message for New Hampshire: if it ain't broke, don't fix it.
Edwards regaled a crowd of more than 200 this morning with indictments of corporate greed and lobbyists' grip on Washington D.C., along with pledges to fight for universal health care, fairer trade deals and an end to the Iraq war. He proclaimed himself the underdog in Tuesday's primary, but added "the real underdog in America is the middle-class, the low-income families in America who are struggling just to survive."
It's essentially the same pitch Edwards gave Iowans in the weeks leading up to his second-place finish in the Jan. 3 caucus (won by Sen. Barack Obama), and it's very similar to the language he employed on an early-fall swing through New Hampshire. And it stands in contrast to several other candidates touring the state this weekend, who have retooled their messages to appeal to New Hampshire's independent-minded voters and to incorporate lessons from the Iowa results.
Democratic Sen. Hillary Clinton is delivering a New Hampshire stump speech that warns of sharp contrasts with Obama, and which Boston Globe article this morning called "remarkable for the number of new elements introduced in it." Republican Mitt Romney has re-branded himself a man of "change," and GOP rival Mike Huckabee has toned down his religious references and upped his tax talk
Edwards aides call the success of the former North Carolina senator's message the "unwritten story of Iowa." The Edwards field organization targeted 42,000 Iowans for caucus-night turnout, spokesman Mark Kornblau said. Some 80,000 Iowans ended up choosing Edwards.
"They went and caucused for him based on this message," Kornblau said.
The biggest tweak in Edwards' speech post-Iowa is his attempt to re-frame the nomination fight as a battle between what he calls the two "change candidates" – himself and Obama - and excludes Clinton, who was long perceived as the national frontrunner. Edwards differentiates himself from Obama largely by saying he'll take a more confrontational approach to corporate interests, particularly insurance and pharmaceutical lobbyists, when pushing issues such as universal health coverage.
In Concord this morning, Edwards let his favorite campaign surrogate – his wife Elizabeth - distinguish him from his two leading rivals in much bolder terms.
Elizabeth Edwards said her husband had reacted more presidentially to the assassination of Pakistan's Benazir Bhutto, telephoning the Pakistani president to plead for democratic progress while his rivals "raced for the microphone". She said he was the most dependable to negotiate fairer trade and the only one of the trio to oppose new nuclear power plants.
Without naming names, she said his health care credentials trumped Obama – whose plan would leave an estimated 15 million Americans without insurance, because it does not mandate health coverage – and Clinton, who had the chance to achieve universal care under her husband's administration a decade ago and instead chose "to spend (her) political capital on passing NAFTA."
She also said two candidates had voted for Iraq war funding without withdrawal timelines attached – again, Clinton and Obama – but didn't mention her husband's since-repudiated vote to go authorize the war in the first place.
Asked if Edwards himself would soon start drawing bolder contrasts with his opponents, Kornblau replied "there's time for that." Reminded that only three days remain before the New Hampshire primary, he replied "there's lots of time after Tuesday."
Posted by Paul B at 1:20:00 PM