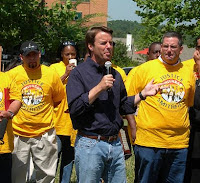 The fundamental problem facing our society today is what Dr. King referred to as "materialism" or "economic exploitation" -- what today we simply call corporate power run amok. The corporate takeover of our democracy and society essentially began with the election of Ronald Reagan in 1980 and has continued unabated under the administrations of Bush Sr., Clinton, and Bush Jr. Sadly, none of the Republican candidates and neither of the corporate sponsored, $100 million dollar Democrats (Clinton and Obama) have demonstrated the courage to publicly challenge corporate power.

Fortunately, one candidate has demonstrated the courage to challenge the corporate elite on behalf of the vast majority of working and middle class Americans: John Edwards. He deserves our support. More pragmatically, a vote for Edwards is a vote for the rapidly growing and increasingly powerful progressive, non-corporate wing of the Democratic party, what I call the "Rainbow wing" and what the late Sen. Paul Wellstone referred to as "the democratic wing of the Democratic party." A vote for Obama, and even more so for Clinton, represents an endorsement of the corporate status quo within a party that is supposed to represent labor and working folks, but cannot do so effectively as long as it is beholden to the same corporate elite that have traditionally controlled the GOP.

Because we still have three candidates running strong campaigns for the Democratic nomination, there is a fair chance that no Democrat will secure enough delegates to win the nomination outright. Thus, every vote for Edwards will be crucial to increase the influence of progressives at what may be a brokered convention in Denver this summer. Please keep that in mind as you make this important decision.

Keep the Faith,
Paul B

RENO, Nev. – John Edwards sharpened his criticism of Democratic front-runners Hillary Clinton and Barack Obama Thursday night, saying they are helping turn the party into the champion of special interests.

“When did our party change? When did we become the party that took more money from drug companies and insurance companies than the Republicans?” Edwards asked.
Advertisement

“Not when I'm president of the United States” he told hundreds of supporters who jammed a Reno union hall Thursday night.


The former North Carolina senator repeated his theme of being the only Democrat in the race who has never taken money from lobbyists or political action committees, but unlike a similar speech at a Reno hotel-casino on Wednesday, he called Sens. Clinton and Obama out by name.
“The person who raised the most money from oil and gas companies is not a Republican. It's a Democrat. It's Sen. Clinton,” Edwards said.

The party's 2004 vice presidential candidate said the contributions make his primary opponents beholden to big corporations, causing them to compromise on such things as health care reform and mortgage foreclosures.


“You can't take these people's money and challenge them and fight them in a way that is going to be necessary to bring about change,” Edwards said.

“We desperately need universal health care for every man, woman and child in this country. Sen. Obama's plan is not universal. It leaves as many as 15 million Americans uncovered,” he said.
Edwards said he supports Clinton's call to freeze interest rates for five years and place a moratorium on foreclosures for 90 days but “we have to do more than that.”


Although Obama won the endorsement from Nevada's largest labor union – the 60,000-member Culinary Workers Union, Edwards said he's “optimistic” about his chances of winning the state's caucuses on Saturday due largely to “my brothers and sisters of organized labor.”
“I am without a doubt the strongest labor candidate,” Edwards said before boarding a plane to complete a campaign swing across Nevada in rural Elko later Thursday night.

“Even though I am the underdog running against two campaigns of $100 each, this is what is going to happen in Nevada on Saturday,” he said, pointing to the overflow crowd at the Reno headquarters of the United Brotherhood of Carpenters and Joiners.


“You are the foot soldiers in this movement. We don't have all the money on television ... but you are what we have,” he said, urging them to hold their ground when Obama and Clinton backers try to pull them into their camps at the caucus meetings.

“You've got to go in there with some guts and determination. Don't back away from what you believe in. You stand up for your candidate, i.e., me.”

Asked to name a weakness, Obama mentioned his messy desk and reliance on staff. Clinton faulted him for it, saying she was better prepared to oversee the government bureaucracy.
Edwards said he was neither type and referred to his work as a lawyer who fought against big corporations.

“I think what we need in the next president of the United States is somebody with some guts and fight and determination.”

Associated Press Writer Ryan Nakashima in Henderson contributed to this report.
Posted by Paul B at 12:06:00 PM