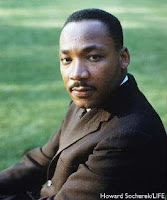 Former Senator John Edwards, the Presidenital candidate with the most progressive and detailed plan to combat racial injustice in America, defended the legacy of Dr. Martin Luther King, Jr. in the wake of Hillary Clinton's demeaning comments about America's greatest human rights champion. Sen. Edwards' comments (excerpted below), were delivered during an appearance yesterday at Mt. Zion Missionary Baptist Church in Sumter, S.C.

Senator Clinton's comments continue a long and disgraceful history of the Clintons playing upon the racial fears and resentments of white Americans, sometimes subtly, sometimes not so subtly. Some of the more blatant incidents included Bill Clinton "dissing" Sista Souljah (and indirectly Rev. Jesse Jackson) at a Rainbow Coalition conference hosted by Jackson; presiding over the execution of a mentally retarded African American man while Governor of Arkansas to demonstrate his "tough on crime" credentials for white voters; and, for the same purpose, posing for a photo op in front of a black chain gang for a national news magazine. Remember also that it was Bill Clinton, not Ronald Reagan, who "ended welfare" as we knew it. Despite his moniker as the so-called "first black President," Bill Clinton has never hesitated to play on white racial fears to advance his own political ambitions, and now Hillary is continuing the tradition. Shame on the Clintons, and props to Sen. Edwards for defending Dr. King.

For the record, the Sacramento Progressive Alliance is officially supporting the three progressive Democratic candidates: John Edwards, Barack Obama, and Dennis Kucinich. We oppose candidates dedicated to serving corporate interests, whether they be Democrats or Republicans. We have a zero tolerance policy on racism in any form, and will vigorously challenge any appeals to racial bigotry, no matter which candidate they come from. Those of us on the SPA Board who support Sen. John Edwards do so because we believe he is the most progressive candidate, but we are also thrilled by the success of Barack Obama and we will be proud to support his candidacy if he wins the Democratic nomination. We believe that either an Edwards/Obama or Obama/Edwards ticket would not only win in November, but would have the potential to dramatically change our country for the better.
-- Paul B, Co-Chair, Sacramento Progressive Alliance

Anne E. Kornblut, Washington Post, January 13, 2008
For the first time on Sunday, the debate also expanded to include Edwards, who turned the "fairy tale" accusation back around against the Clintons.

"As someone who grew up in the segregated South, I feel an enormous amount of pride when I see the success that Sen. Barack Obama is having in this campaign," Edwards said during an appearance at Mt. Zion Missionary Baptist Church in Sumter, S.C.

After reading about this latest altercation, I sent the following message to the Washington Post:

As a long-time supporter of Edwards, it disturbs me to see him jump on the Obama bandwagon by taking part in a distortion of Clinton's words. I heard her comment on King v. Johnson and understood it perfectly in context. What she MEANT was that, though King built public backing for desegregation, it took someone in public office to bring about the legislation that would implement the principle.

Incidentally, I found it repugnant that Obama would class himself with King and JFK. King had a specific mission, clear to everyone, unlike Obama who claims to be all things to all people. And JFK--whom I voted for--was a moderate Democrat, making no grandiose claims. His great accomplishment was based on pragmatic good sense, avoiding potential cataclysm that could result from the Cuban Missile crisis.

All in all, it demeans Edwards to curry favor with the Obamites by bashing Clinton.