King's Mission of Economic Justice Has Yet to Be Realized 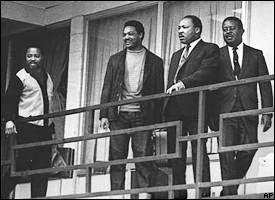 Tuesday, January 22, 2008 by the Chicago Sun-Times
by Rev. Jesse Jackson
In 1966, the Rev. Martin Luther King moved into a $90-a-month, four-room apartment in a tenement at 1550 S. Hamlin Ave. on the West Side of Chicago. He sought to challenge the slumlords who were exploiting the poor, the city that was ignoring them, the national government that had abandoned them. Today, that lot is empty. The tenement is gone, but nothing has been put in its place. King’s last mission has yet to be realized.
King was driven, even after he received the Nobel Peace Prize. The Civil Rights Movement had won the guarantee of basic citizenship. Segregation was no longer legal; blacks had the right to vote, to go to public schools, to ride on the bus or stay in the hotel. But equal justice under the law raised the fundamental question of what kind of justice.
King’s last campaigns were about basic economic justice. He believed that every person should have the right to a job, to a good education, to affordable health care, to the training needed to move on up. A vibrant economy was necessary but not sufficient. Government had to step in.
Today, the U.S. economy is in trouble. Foreclosures, bankruptcies, unemployment and poverty are up. Jobs are going out; drugs and guns coming in. The New York Times reports that the “swift deterioration in the job market” hit “teenagers, blacks and Hispanics” the hardest, with unemployment increasing at “triple the increase for whites. Over one-third of all African Americans between 16 and 19 are now unemployed. The number of children without health insurance is growing.
Structurally, the economic ruins are everywhere apparent. A bridge falls in Minneapolis at the head of the Mississippi; levies fail New Orleans at the foot of the mighty river. Across the country, basic investment in areas vital to our economy — from bridges, to mass transit, to the electric grid, to broadband, to affordable college and universal preschool — has been starved, even as the Bush administration has lavished hundreds of billions on tax cuts to the wealthiest Americans (like the hedge-fund billionaires who pay a lower tax rate than their secretaries) and nearly a trillion dollars on the catastrophic “war of choice” in Iraq.
Now the president and Congress are negotiating about a short-term “stimulus” package to kick-start a slowing economy. The current consensus is for temporary, small-bore tax cuts — essentially, Wal-Mart gift certificates. There is no relationship between stimulus and real needs: Nothing for those about to lose their homes; nothing for the collapsing infrastructure; no help for the cities or states.
Questioning a rare bipartisan consensus isn’t popular. Raising the matter of the crisis facing the poor and our urban areas isn’t politic. But Dr. King understood that he had a different charge: “Cowardice asks the question, ‘Is it safe?’ Expediency asks the question, ‘Is it politic?’ Vanity asks the question, ‘Is it popular?’ But conscience asks the question, ‘Is it right?’ And there comes a time when one must take a position that is neither safe, nor politic, nor popular; but one must take it because it is right.”
Let us celebrate Dr. King’s dream by adopting once more his final mission.
jjackson@rainbowpush.org
© Copyright 2008 Digital Chicago, Inc.
Posted by Paul B at 10:47:00 AM