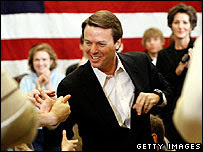 The Nation -- Politico reports that consumer crusader and former presidential contender Ralph Nader has expressed "strong support" for John Edwards.
Nader has been edging toward this "endorsement" in the last couple of weeks. In an appearance on "Hardball," in mid-December, he said Edwards "now has the most progressive message across a broad spectrum of corporate power damaging the interests of workers, consumers, taxpayers, of any candidate I have--leading candidate I have seen in years." He went on to explain that "the key phrase is when he [Edwards] says he doesn't want to replace a corporate Republican with a corporate Democrat." Nader told Politico, " it's the only time I've heard a Democrat talk that way in a long time." For Ralph Nader--and take my word for it, please--that is rare praise for a leading Democratic politician.
In throwing his support to Edwards, Nader was scathing in his criticism of Hillary Clinton--calling her a "corporate Democrat ...[ who ] ... has not led the way against the avalanche of military contracting, corporate crime, fraud and abuse."
Edwards' passionate populism, which has been dismissed in too many mainstream articles in the past weeks as "angry" or "over the top," is speaking to the reality of the concentration of power and wealth in a few hands--a concentration that is working against the vast majority of Americans. Why is what Edwards is saying "over the top" when 72% of the American people told "Business Week" in 2000--- that corporations have too much control over their lives and jobs.
Will Nader's support encourage progressive Iowans to give him a win in Thursday's caucuses? Hard to know. This is an extraordinarily fluid, tight, ideologically fascinating race in which progressive champion Dennis Kucinich has just urged his supporters to go for Barack Obama in a second round. And there's no question that Nader remains controversial among many progressives who believe that he took enough liberal votes from Gore in 2000 to give Bush the presidency.
Whatever happens to Edwards in Iowa, his full-throated populist message is unlikely to disappear from this race. Clinton and Obama are already sounding populist appeals in their speeches. It's up to progressives to keep the heat on so that taking on corporate power, taking back govenment, empowering workers and disempowering the lobbyists remains a cornerstone of small-d politics in 2008 and beyond.
As Nader says, "Edwards is at least highlighting day after day that the issue is who controls our country: big business or the people?"