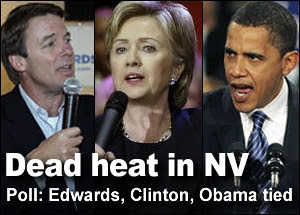 A new poll by the Reno Gazette-Journal shows a neck-and-neck three-way race among Democrats for Saturday's caucus. On the Republican side, U.S. Sen. John McCain has taken his first lead in Nevada of the election season, and Mitt Romney, who has been working Nevada harder than any other Republican, is trailing in fourth place.
A look at the top line results (more will be posted later this morning):
Barack Obama: 32 percent
Hillary Clinton: 30 percent
John Edwards: 27 percent
John McCain: 22 percent
Rudy Giuliani: 18 percent
Mike Huckabee: 16 percent
Mitt Romney: 15 percent
Fred Thompson: 11 percent
Ron Paul: 6 percent
Duncan Hunter: 1 percent
The poll was conducted Jan. 11 to Jan. 13 , with samples of 500 likely Democratic caucus-goers and 500 likely Republican caucus-goers statewide by Maryland-based Research 2000. The margin of error is 4.5 percent.
posted by Anjeanette Damon at 7:06 AM
Posted by Paul B at 10:23:00 AM