Yes We Can! South Carolinians Reject the Politics of Racial Division 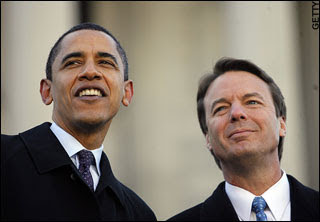 Our fellow Americans in South Carolina, black and white, female and male, young and old, rich and poor, made an incredibly significant contribution to our democracy and our country yesterday. They rejected the gutter, race-baiting politics of the Clintons.

In doing so they made me as proud to be an American as I've felt in a very long time. In recent years the politics of racial division have been used almost exclusively by cynical, right-wing Republicans. But to their great shame the Clintons have now replaced Lee Atwater, Jesse Helms and Ronald Reagan as the poster children for dealing from the bottom of the deck, for playing the race card to incite racial fear and resentment to divide our communities along the color line.

The good people of South Carolina responded Saturday with a shout of "!Ya Basta!" ("Enough Already!") that can be heard ringing from sea to shining sea. Obama won an overwhelming, historic, landslide victory by more than doubling Clinton's vote in the Democratic primary. Obama won with both women and men, he won in every age category, and he won an overwhelming majority of black voters. Here in the deepest of the deep South, Obama also won with whites under 30 and earned an impressively large portion of whiter voters overall. But wait, it gets even better. The Clintons' slash and burn, divide and conquer, racially divisive campaign was specifically designed to bring white voters into the Clinton camp while conceding the black vote to Obama. Guess what? It didn't work. Clinton got trounced among black voters as planned, but she didn't win the white vote, either. Instead my man John Edwards did.

Sen. Edwards, the most progressive candidate in the race, won the white vote in this conservative state by rejecting the Clintons' dirty politics of racial division and joining with Obama to wage the politics of hope, the politics of social justice, and the politics of transformational change. Among those white voters who made up their minds over the last few days, Edwards beat Clinton by an even wider margin. (You can see the exit polls here.) In a state where up until now the former President has been a revered figure and where Sen. Clinton led in the polls just last month, three quarters of South Carolina Democrats, black and white together, rejected the Clintons and their morally bankrupt politics of division by voting for either Obama or Edwards. As Sen. Obama said so eloquently in his victory speech, the politics of the past were defeated by the politics of the future.

From the bottom of my heart, I'd like to thank the good people of South Carolina. We may finally be witnessing the birth of a New South after all, and perhaps a New America. The vision of hundreds of enthusiastic Obama supporters, black and white together, representing every age, gender, and socio-economic group and chanting, "Race Doesn't Matter! Race Doesn't Matter!" during Sen. Obama's uplifting victory address brought me to tears. The last time I have felt this much hope for our racially scarred and divided country was twenty years ago when another charismatic, progressive black leader, the Rev. Jesse Jackson, swept the Super Tuesday primaries with the original version of the politics of hope. Yes, we should probably point out that the chanters were technically incorrect. Race does still matter in America. The gap in median financial wealth between white and black families, for example, is a an appalling 31:1.

Yet the symbol of racial unity emanating from South Carolina last night at Obama-fest 2008 was nevertheless a beautiful sight to behold in a nation desperately in need of something and someone to believe in. I'm only 43 years-old and plan on sticking around for a long time to come, but as a veteran racial justice educator and activist I honestly didn't expect to see something this inspiring happen again in my lifetime. Somewhere in my own almost forgotten past, I can vaguely recall this feeling. Although I was much younger and more idealistic back then, a generation later I can still almost feel the goose bumps, can still almost feel the sensation of prideful tears welling in my eyes, can still almost hear, however faintly, the inspiring words of Jesse Jackson echoing in my ears... "Keep Hope Alive! Keep Hope Alive! Keep Hope Alive!"

Rev. Jackson, I have tried, I swear I've tried, but keeping hope alive has been hard, very hard. Hope has been in too short supply during the last twenty years of war, suffering and torture; stolen elections and the horrors of Katrina; the increasing racial divide and the demonization of our Latino immigrant sisters and brothers; the rollback of women's rights and the hateful attacks on our lesbian and gay neighbors; and perhaps most heartbreaking of all, the shameful and absolute abandonment of our poorest and most disenfranchised fellow Americans. Yes, it's been a long, difficult and often frustrating journey for the generation of young rainbow activists who you created and inspired during the 1980's. We have tried to keep our hope alive, to keep alive the dream of your mentor and our hero, but in all candor we have failed more often than we have succeeded. Yes, we have continued to fight the good fight, but at times our wealthier, more powerful, more violent and more cynical oppponents have gotten the best of us. Our hope is still alive, yes -- but we must admit that at times it has been hanging on by a thread, and a very fragile one at that.

And then last night in Columbia happened. We heard all those voices so filled with hope, we saw all those faces so full of joy and excitement, we saw in their eyes the earnest longing for something more, something greater, something deeper, something better. "Yes We Can! Yes We Can!" "Keep Hope Alive! Keep Hope Alive!" Different words, a different time, a different voice. But the sensation, I believe, is the same. The same desire for unity, for cooperation, for justice, for equality, for compassion, for social change. The same willingness to work, to sacrifice, to struggle and, if need be, to suffer to bring about that change. Twenty years later perhaps a new leader and a new generation has given us a reason to, once again, keep our hope alive. Yes We Can, I believe, Yes We Can! And if you don't think last night was a powerful moment in American political history, keep in mind that this writer is not even a Barack Obama voter, but rather a supporter of John Edwards.

[If you missed Obama's inspiring address last night, I'm sorry for you, but you're in luck. We've posted the video below.]
Posted by Paul B at 10:18:00 AM