[Note: My man John Edwards has completely dropped the progressive ball. He should have endorsed Barack Obama at some point during the last few weeks when it could have made a major difference in the race. I'm very disappointed. Now that Obama has the nomination virtually secured an Edwards endorsement will have little impact and will just make Edwards look like a frontrunner. Reports that Edwards is concerned about Obama's supposed lack of experience make Edwards look foolish since Obama has more legislative experience than he does. On the other hand, if Edwards endorses Clinton he will look like a fraud since he spent the last year portraying her (accurately) as a "corporate Democrat" and therefore part of the reason we need "change." He would also look foolish, since her campaign is on life support and somebody in Clintonland should pull the plug to avoid further humiliation on March 4. At this point any more come-from-ahead blowout losses will only weaken her influence as an effective U.S. Senator and potential Senate Majority leader. Edwards' window of opportunity has now closed every bit as much as that of our Sacramento Kings. By trading Bibby last week, at least our Kings have officially begun the rebuilding project. Guess that's what John Edwards needs to do now as well. He's a very talented public figure and by all accounts a good and decent man. I am still proud to have worked on his campaign. On the other hand, his campaign strategy was deeply flawed and he has now compounded the problem by demonstrating such profound indecision over the last few weeks when the times called for decisive action. His moment came but rather than seizing it he blinked -- as a result he is now sliding into political irrelevance. What a bummer. We all had such high hopes. I still think Sen. Edwards would make an oustanding Attorney General but there are certainly other good candidates out there and I don't see why Obama would give him the job at this point. Not that he's asking for my advice, but at this point perhaps Sen. Edwards should focus on taking care of his children and his wife Elizabeth, a truly courageous and inspirational woman. --PB] 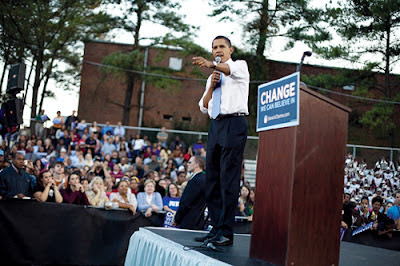 Printed from the Independent Weekly website: http://www.indyweek.com/
POSTED ON FEBRUARY 20, 2008:

High-dollar donors, including former adviser and law partner, get behind Barack
By Mosi Secret

John Edwards may have yet to give his official endorsement to either of the Democratic presidential hopefuls, but his prominent local supporters—and their wallets—are lining up behind U.S. Sen. Barack Obama in his bid to secure the nomination.

This week, Triangle supporters who commit to raising at least $10,000 for Obama will meet with Obama's campaign manager David Plouffe at a lunch organized by Tim Toben, Edwards' former environmental adviser and a major Edwards fundraiser. Toben, of Chapel Hill, became a convert to the Obama camp after a two-day trip to the Illinois senator's Chicago headquarters earlier this month, at the campaign's invitation.

"It just became clear to me that it's no accident that this candidate is doing so well," says Toben. "He clearly is a new force on the scene, but like a lot of great CEOs, he has hired very smart people to run his organization."

The Feb. 21 event will be hosted by the Raleigh law firm Kirby & Holt, where Edwards' former law partner and close friend from law school, David Kirby, is an attorney. Employees at the firm have given almost $27,000 to the Edwards campaign in the 2008 election cycle, according to federal campaign finance reports.

Prominent civil rights lawyer Adam Stein, who has supported Edwards since his first run for the U.S. Senate in 1998, is also supporting Obama.

"I was loyal to John. I was happy to be an enthusiastic supporter of his, but since he was gone, I'm freed up from those loyalties," Stein says. "I have been involved in lots of campaigns and [Obama] is the most inspiring candidate I can remember."

Edwards dropped out of the race Jan. 30 after a two-year campaign for the White House. He was unable to match money or votes with his two high-profile opponents, Obama and U.S. Sen. Hillary Clinton.

However, Edwards outpaced his competition in North Carolina. Edwards raised $2.2 million in his home state through the end of 2007—about triple the coffers of Clinton or Obama. More than half of that came from Raleigh, Durham and Chapel Hill, according to campaign finance reports.
Those donors seem to be shifting allegiances to Obama en masse, as well as tapping their networks to solicit contributions for him.

"When I start thinking about all the local races, I start to try to calculate what's the best shot for down ticket," says Protzman, a liberal blogger. "I feel like an Obama candidacy in a general election will have the effect of increasing Democratic Party turnout—traditional as well as new voters—and probably won't crank up the rabid right the way a Hillary candidacy would."
Protzman and Brown hosted a Kerry/Edwards event and raised $150,000 at one party. Protzman says 80 percent of the former Edwards supporters he talks to are now supporting Obama.

The exact amount Edwards' contributors have given to Obama in the three weeks since Edwards dropped out is unclear; campaign finance reports for February will be submitted to the Federal Election Commission later this month.

Money does not necessarily equal votes though. Public Policy Polling, a Raleigh company, found that Obama leads Clinton by a slim margin in North Carolina, just 42 percent to 40 percent. The poll also suggested that voters who favored Edwards are jumping to the Clinton and Obama campaigns in almost equal numbers, at 41 percent each.

"In my view, Barack Obama brings huge number of disenfranchised folks to the polls," says Toben. "He brings people of color. He brings lots of Democrats. And he brings independents to the polls."