How Edwards Advanced the Democrats' Debate 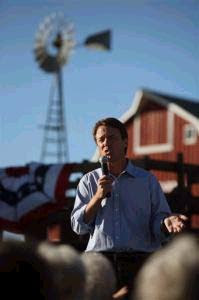 Published on Saturday, February 2, 2008 by The Boston Globe
by Derrick Z. Jackson
The wisps of the John Edwards campaign were visible at the beginning of Thursday night’s debate between Democratic presidential candidates Barack Obama and Hillary Clinton. Obama led off by saying that Edwards “did such an outstanding job elevating the issues of poverty and the plight of working families all across the country.”
Clinton added that John and Elizabeth Edwards reminded the nation “that in this land of such plenty and blessings, there are still 37 million Americans who are living below the poverty line and many others barely hanging on above.”In saying she believed “absolutely passionately in universal healthcare,” Clinton again referenced Edwards. “If you don’t start by saying you’re going to achieve universal healthcare, you will be nibbled to death,” she said. “And I think it’s imperative that as we move forward in this debate and into the campaign, that we recognize what both John Edwards and I did, that you have to bite this bullet.”
Obama said both he and Edwards were linked in a mission on congressional ethics. “I think that a lot of issues that both Senator Clinton and I care about will not move forward unless we have increased the kinds of ethics proposal that I passed just last year - some of the toughest since Watergate - and that’s something that John Edwards and I both talked about repeatedly in this campaign. That’s why I don’t take federal PAC and federal lobbyist money.”
From that point, the strands of Edwards’s populism dissipated into relative Democratic bliss. It was refreshing that Obama and Clinton toned everything down in a race where acrimony was burning bridges to the voters. But the compliments to Edwards are more complicated than the pleasantries.
If, as the stereotypes of this campaign go, Obama represents transformative hope and Clinton represents international Rolodex Day One experience, Edwards significantly tapped into a critical segment of Democratic voters who smoldered with how the world’s richest nation fell so far behind on healthcare and its standard of living and lurched into an unnecessary war whose tragedies will haunt us for decades.
In apologizing for his vote to give President Bush the authority to go to war in Iraq, he exhibited a humility that the nation desperately needs from the Oval Office. He moved both Obama to more pointedly point out what is “personal” about this campaign and Clinton to say what she is “passionate” about.
He hurt his common man image with the fancy haircut, house, and hedge funds, but ultimately he had credibility in saying the race was personal in a way that Obama or Clinton are fortunate enough not to have felt. A man who has had to bury a son and has a wife with inoperable cancer could not be running for president for pure ego.
Most important, the Edwards campaign was a reminder that any true change will not be easy. Some people snickered when he talked of an “epic battle” ahead and declared that he would confront Congress with a declaration of healthcare war (”If you don’t pass universal healthcare by July of this year, July of 2009, I will use every power I have to take your healthcare coverage away from you”). Many pundits and politicians wrote off his speeches as too angry.
The more accurate assessment is that Edwards’s anger - whether you believed it or not - may have just helped forge a more focused Democratic Party. Why else would Obama and Clinton play nice in the Los Angeles debate? They got the message that there is much more to lose that is greater than their individual campaigns.
In Iowa, where he finished between winner Obama and third-place Clinton by getting 28 percent of caucus support, Edwards was successful in charging, “Senator Clinton defends the system and says it’s OK to take lobbyists’ money.” He cut into Obama’s support with a more declarative position on Iraq, saying he would immediately withdraw 40,000 to 50,000 troops.
Actually, I am not so sure about the poverty stuff since the last time the Democrats had the White House under Bill Clinton, little was done to stop the exploding wealth gap in this nation. But Edwards gave it a fighting chance of being taken seriously.
In November, Lee Mickey, a 71-year-old retired Iowa “farm wife,” said she liked Obama’s hopeful message but found Edwards’s edge “very, very necessary.” Whoever wins the nomination, Obama or Clinton, will need that edge.
Derrick Z. Jackson’s e-mail address is jackson@globe.com.
© Copyright 2008 Globe Newspaper Company
Posted by Paul B at 3:30:00 PM

I am apparently part of that "critical segment of Democratic voters who smoldered with how the world’s richest nation fell so far behind on healthcare and its standard of living and lurched into an unnecessary war whose tragedies will haunt us for decades" as referenced in the article "How Edwards Advanced the Democrats' Debate"..... My absentee ballot was already marked for John Edwards and I was dismayed to return to the U.S. only to find out that John Edwards had withdrawn.... What will happen to those John Edwards Delegates now?....