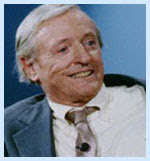 It may sometimes be confusing, what with all the intramural squabbling among libertarian conservatives, neoconservatives, paleoconservatives, and the like, to know exactly what “conservatism” stands for these days. But Buckley more than anyone made clear that there are things it would not stand for. His “first great achievement,” the Dallas Morning News noted in 2004, “was to purge the American right of its kooks. He marginalized the anti-Semites, the John Birchers, the nativists, and their sort.” In their place, beginning in the 1950s, he cleared the way for the construction of a conservatism of optimism and progress and good humor. And, above all, of ideas: Ideas about limited government and individual freedom, about the blessings of the market and the lethality of Communism, about the importance of religion and the securing of peace through strength.

But it wasn’t Buckley’s ideas alone that made him so influential. It was his style, too: funny, unflappable, irrepressible, glamorous, gracious. He could be merciless to the pompous, yet was renowned for his vast range of friendships. “He inspired and incited three generations of conservatives, and counting,” his successors at National Review wrote today upon learning of his death. He did so not only through the force of his ideas and an amazing gift for expounding them, but also by embodying a conservatism that was cool and fun and merrily down-to-earth. How many other influential American intellectuals ever penned a column singing the praises of peanut butter?

In 1999, Buckley was interviewed for “Nightline” by Ted Koppel. "Mr. Buckley, we have 10 seconds left,” Koppel said at the end. “Could you sum up in 10 seconds?" Buckley replied, simply: "No." In the days ahead, no one will find it easy to sum up Bill Buckley’s extraordinary legacy. His output was so prodigious and his range so immense that he routinely made the rest of us “feel like hopeless underachievers,” as I wrote in a column four years ago. Today Buckley’s astonishing, history-changing output comes to an end. But his life and his life’s work will resonate for many years to come.