A Challenge and Milestone in Our History 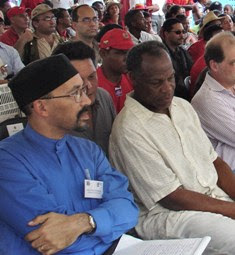 By Bill Fletcher, Jr.
BlackCommentator.com
So, I watched Senator Obama’s speech Tuesday night and thought to myself how, despite every reservation I have had about Senator Obama’s politics, I was moved by the moment. Deep inside me I had always expected that a conservative Black candidate could emerge at some point, but I thought that it was very unlikely that a liberal-to-progressive could, in the near future, emerge and win the nomination.
The color line has not been shattered. It has been further bent. It has been rendered more complex by the rise of a nominee for the Presidency of the United States of America who is of African descent. His emergence challenges the history of the USA, even if his politics are not on the Left. The fact that he was forced, through events, to articulate the clearest and most eloquent analysis on race in the USA by a mainstream politician, made this campaign particularly significant. What is even more significant is that Senator Obama is correct: this campaign is not actually about him, but it is about a very deep desire on the part of millions of people in the USA for change. How that “change” will be defined is not primarily a question for who gets elected in November. It is a question for those of us in the field who have contending visions for what the USA and the world should look like.
I sat in front of the TV transfixed, knowing that this was an historic moment, irrespective of whether Senator Obama wins or loses in November. I, for one, will continue to critically support him. This means that I do think that there is a VERY significant different between Senators Obama and McCain. This is not a tweedle-dee/tweedle-dumb juxtaposition, even given my differences with Senator Obama. Senator McCain wishes to continue the direction of George Bush and to advance the process of the consolidation of a neo-liberal authoritarian state. Senator Obama is looking for a politically liberal solution to the current crisis. I do not think that such a solution exists, but I do think that there is an opening for progressives to push for genuine alternative political and economic solutions to the crises afflicting the USA and the planet as a whole. This will inevitably mean challenging and pushing Senator Obama on matters such as foreign policy and healthcare. This is the essence of critical support; actively supporting his candidacy while at the same time not being shy concerning expressing our differences.
Yes, this was and is an historic moment. There is, however, little time to relish in this moment because it will soon pass. If we are not thinking both about building for an Obama victory, but more importantly, laying the foundation for stronger social movements and a mass political organization that can advance a progressive direction, we will have misunderstood our challenge and fallen prey to illusions. Taking nothing away from Senator Obama’s own brilliance, he stands today as the presumptive nominee of the Democratic Party because of a groundswell of anger and hope that exists across the USA. It is up to progressives to do more than simply acknowledge this; we must help to gel it into a wave.
BlackCommentator.com Executive Editor, Bill Fletcher, Jr., is a Senior Scholar with the Institute for Policy Studies, the immediate past president of TransAfrica Forum and co-author of the just released book, Solidarity Divided: The Crisis in Organized Labor and a New Path toward Social Justice (University of California Press), which examines the crisis of organized labor in the USA. Click here to contact Mr. Fletcher.
Posted by Paul B at 3:32:00 PM