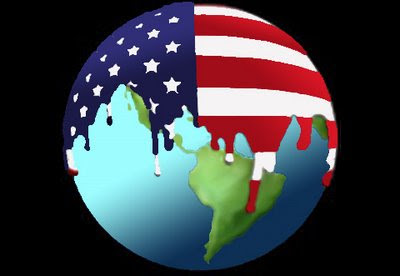 "The Whole World is Watching.... "
By Derek Shearer / June 18, 2008
Nothing could be more accurate today than the political chant from Chicago in 1968: "The Whole World is Watching." The level of interest in the upcoming U.S. presidential contest is incredibly high, greater than at any time in post-Cold War history. This is due to the rapid decline of America's reputation abroad during the Bush administration and to the hope that Democratic candidate Senator Barack Obama will restore America's image not with public relations, but with new internationalist policies.
In the past month, I have seen this phenomenon first hand. I have traveled to Syria, Peru and Bolivia as a speaker in the State Department's public diplomacy program. In each country, I heard from US embassy staff about how a record number of foreign journalists have requested travel to the US to cover the elections. I met with some of these reporters during my trips. I also encountered the same interest among students who attended my university lectures -- and of course, business and government leaders wanted to know in detail what an Obama presidency might mean.
In Syria, for example, students at the elite public policy school at Damascus University were fascinated to learn that Obama's middle name is Hussein, and that his mother's second husband was a Muslim who took young Barack to live for years in Indonesia. These young Syrians seemed amazed that the United States which many in the region see as the Great Satan would actually nominate such a person to be president -- and the thought that he might be the next president of the US was almost beyond belief. Of course, I got the not unexpected questions about whether Obama too would would be under the thumb of the Jewish lobby -- but overall, a sense of hope and optimism seemed to prevail. Almost every Syrian whom I met felt that Obama might bring a new beginning to US-Syrian relations, and perhaps usher in a genuine and wider Middle East peace.
In Peru and Bolivia, students not surprisingly were focused on their own region. They wanted to know if Obama would pay greater attention to Latin America -- perhaps rekindling the spirit of JFK and the Alliance for Progress. Government officials asked tougher questions about Obama and the Democratic Party's commitment to the global trading system, and whether US special interests might force Obama to close US markets to foreign goods. They also wanted to know what a President Obama might do about about drugs in Latin America, and about the danger that some states, perhaps even Bolivia, might come to be dominated by narco politics and anti-democratic groups. Of course, they were curious about Obama's offer to meet with Venezuela's populist leader Hugo Chavez, and about how US-Cuban relations might change under Obama.
As a Democrat and former US ambassador, I made it clear that I did not speak for the Obama campaign (I supported Senator Clinton in the primary), but that I knew and respected him, that he had studied at Occidental College where I hold a chair in diplomacy, and that many of my friends serve on his foreign policy team. I told audiences that my students at Occidental, inspired by Obama's success, recently completed a memo for the next president entitled Rebranding America (available online at: www.oxyworldwide. com) and that copies were sent to Obama and his team, as well as to McCain and his. Many students seemed intrigued about how they could "rebrand" their own nations.In every talk and interview abroad, I made these basic points:

* There are significant differences between Senator McCain and Senator Obama on the two most important issues of the campaign: the economy and the war in Iraq. In the past two decades, US foreign policy has become highly partisan and emotionally charged -- politics no longer stops at the water's edge as it largely did during the Cold War -- and it will matter a great deal, depending on which candidate is elected. If Obama becomes president, he will first focus on responsibly removing American troops from Iraq -- one of his key campaign promises and a signature commitment of his political career. He will also have to manage and ameliorate the economic distress of the American people. On both these key issues, Obama and McCain are light years apart.
* The world beyond Iraq will not (and cannot) be ignored. Obama will be able to multi-task because he will have a reservoir of talent on call. All of his foreign policy advisors -- notably Anthony Lake, Susan Rice, and Greg Craig -- are experienced hands from the Bill Clinton administration. As I told foreign audiences and journalists, one of the secrets of the campaign is that all of Obama's people are Clinton people -- and this is a good thing. Under the leadership of Tony Lake, the Obama campaign has a assembled a top notch group of professionals. On the Middle East, there are pros such as Dennis Ross, Martin Indyk, and Robert Malley, among others, to call on. They are among our most experienced negotiators.
On Latin America, there are not only the usual advisors from the Council on Foreign Relations, but also younger scholars such as Russell Crandall from Davidson College, a leading expert on drug wars in the region. As President, Obama would have an impressive stable of very senior officials whose services he can engage. For Secretary of State or Secretary of Defense, think Senators Biden, Kerry, Dodd or Mitchell, and former General Wesley Clark. Think former President Bill Clinton as special envoy to the Middle East (perhaps in tandem with former British PM Tony Blair). Think Nobel Prize winner Al Gore as special envoy to renewed global warming talks. Think former Senator Sam Nunn as special emissary to Putin's Russia, or former Centcom commander Admiral William Fallon as special emissary to Iran. And still on the bench to be deployed would be Richard Holbrooke, Madeleine Albright, and Strobe Talbott. The point is that President Obama would have a wealth of talented and experienced Americans at his disposal -- an arsenal of "smart power", the envy of any nation and any leader.
* Globalization is not Americanization -- but it does require American leadership to work more fairly and effectively. Democrats are not economic nationalists or isolationists -- but they understand that a sustainable globalization requires activist government inside each nation, as well as greater international cooperation. In my lectures at foreign business schools, I started off by explaining the good news and the bad news. The good news is that contrary to the beliefs of some anti-American voices, there is no American Ruling Class Committee in charge of pushing globalization on an unwilling world. The bad news, of course, is that no one is in charge of the global economy. We still live inside national borders, but the post-Cold War economy is global and is not constrained by international borders, nor are the environmental and social consequences.
This is the central political problem of our age. It is vital for the US to lead, but not dominate in making globalization more equitable and more environmentally friendly -- both within our borders and for the entire world. Senator Obama seems to understand this challenge, although his economic advisors are less diverse than I would expect. He has some talented younger economists such as Austan Goolsbee from the University of Chicago, and he has brought in the predictable Clinton pros like Robert Rubin and Larry Summers. He still needs to reach out to other international economists who combine progressive views with practical experience -- experts such as Sebastian Edwards at UCLA, Martin Carnoy at Stanford, Dani Rodik at Harvard. Manuel Pastor at USC, and Jamie Galbraith at Texas. I also tell foreign business students and foreign business leaders that it is not simply a matter of waiting for Obama to come to power. They can start working for better economic and social policies in their own countries, and arguing for new regional initiatives in the Middle East and Latin America. If Obama comes to power, they will be ready with home grown initiatives to present to him and his team.
I have no idea if my public diplomacy -- I also spoke last year in Kazakhstan, Chile and New Zealand, and I go to Australia his fall -- is having much impact, but my message is always clear and simple: I come in peace and bring fraternal greetings from progressive Americans. Barack Obama seems to embody this message, and to carry with him in the upcoming presidential contest the hopes not only of Americans, but of citizens in almost every country of the world. It is a heavy responsibility, and not to be taken lightly. If Obama can prevail, and can govern with strength, compassion and political wisdom, then he might turn out to be the first truly global president.
The whole world will be watching.
The Huffington Post http://www.huffingtonpost.com/derek-shearer/waiting-for-obama-the-fir_b_107955.html
The Rag Blog http://theragblog.blogspot.com/2008/06/waiting-for-obama-first-global-election.html
Posted by Paul B at 2:41:00 PM