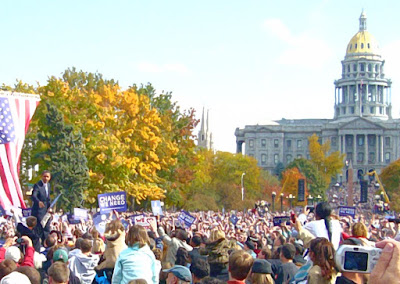 by David Sirota,
Denver Post, 10/26/08
I just got back from the Obama rally at Civic Center Park here in Denver. The Denver Post estimates the turnout was 100,000 people, which is really just astounding considering the total size of the city is about 550,000 people and the size of the metro area is about 3 million people. Here's a shot that gives you a sense of the crowd - and let me just remind you, it's not a short distance between City Hall, where the speech was, to the steps of the state capitol:

Most Americans have seen Obama speak, and millions at this point have been to his events, so I won't bore you with my opinion on the details of his promises (pretty progressive) or of the energy at the event (high). But what I will say is that while most of the rhetoric was standard Democratic stuff, what really seemed new and "transformative" (to admittedly use a cliche description of Obama) - what really seemed to capture those 100,000 Coloradoans (including me) - was his discussion about struggle. I may be an old seadog from the many campaigns I've worked, and I may have learned enough to not be easily mesmerized by politicians, but I will admit right here: the flash I saw from Obama at the end of his speech really blew me away.
Indeed, as he was closing his remarks, he touched on how making change is incredibly painful and incredibly grueling - and how it always has been throughout our history. And the best part - the part where the audience was most silent and rapt - was when Obama veered off his prepared remarks and made it personal:

"Maybe some of your parents or grandparents, they were born in another country without freedom of speech or freedom of worship, but they said, you know what, we know there's this land across the ocean called America, where it's a land of opportunity and a land of freedom, and we're willing to take the risk to travel to that place to create a better future for our children and grandchildren. In this audience, there are people whose parents or grandparents couldn't cast a vote, but they said to themselves you know, maybe my child or grandchild, if we march, if we struggle, maybe they may be able to run for the United States Senate, maybe they might run for the Presidency of the United States of America."
Those references to the courage of immigrants and the civil rights movement are clearly personal to Obama, and they are rarely voiced in Colorado politics - an arena that has often been about bashing immigrants. That he departed from his prepared text to talk about those issues, and tied them to a discussion about how difficult change is - well, it suggests that very "transformative" possibility of the Obama candidacy.
Whether you believe Obama represents real change or not, I came away believing that he understands the challenge of actually making change, should he win. That is, he understands that if he really attempts to fundamentally alter the status quo on major issues, it is going to be a very tumultuous and difficult process - one that only begins on election day.
I'm not 100 percent sure, knowing how hard this will be, that Obama will move into the breach. My heart hopes he will, and my gut tells me its more than likely he will, because Republicans are helping create an even bigger mandate for an Obama presidency than Obama ever wanted. But we will never know if he will unless he gets a chance - a chance which, since early into the Democratic primary, I have believed he deserves (even though I stand by my concerns/objections to some of his specific positions). If he wins, I am sure we will have a president who grasps how tough it will be to make progress - and I am becoming more confident we will have a president who will try to make that progress a reality.
UPDATE: I fiddled with one of my pics from the rally, and made it into an artsy kind of image for my desktop. You can download it here if you'd like to do the same. It depicts not just Obama, but the massive crowd - and in that, it is more a picture of democracy, than of an individual candidate.
Posted by Paul B at 12:20:00 AM