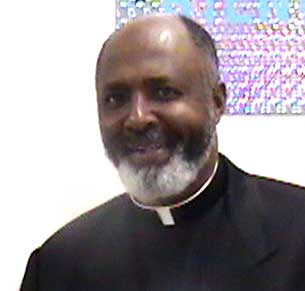 Jean-Juste was a liberation theologist, controversial in both the United States and his homeland, who battled the unequal treatment of Haitian refugees in the federal courts, in Miami's streets and in the media.

He suffered a stroke recently, according to Ira Kurzban, the Miami attorney who represented Jean-Juste's Haitian Refugee Center in several lawsuits against the U.S. government, and died Wednesday evening at Jackson Memorial Hospital. His death apparently was unrelated to the leukemia that Jackson doctors treated three years ago.

''The Haitian-American community has lost a visionary and a central figure who helped to establish the Haitian community in South Florida,'' Kurzban said. "They lost a. . .friend whose arms and heart were always open.''

Marliene Bastien, executive director of Haitian Women of Miami, called Jean-Juste "an icon, someone who gave himself wholely, selflessly to others without any need to''self-promote. 'He was the greatest champion of refugees' and immigrants' rights, and he showed that we, as a country, could do better in the way we treat people who leave their native land to come here.'' Bastien said that Jean-Juste "goes all the way when it comes to defending the rights of the less fortunate. He fights with all his might in the pursuit of justice. He doesn't stop to eat.''

On a very personal note:

We last visited Father Jean-Juste at his church in Haiti as we dropped off boxes of medical supplies. Below is a photo of him with a few of the hundreds of children he would feed daily. To me, he exemplified the heart of Haiti.

A few years earlier, Paul Burke and I stopped to visit him as he was receiving cancer treatments in Florida. He gave us money to carry to Haiti, so that we could insure the children were fed. When we asked if he didn't need this money for his own medication, he gently shrugged, and said, "I am fine; the children need to eat."

This summer, again, we will return to Haiti. Again we will carry loads of school and medical supplies. And again, somehow, we will manage to stuff in some soccer balls for Father Gerry's children. 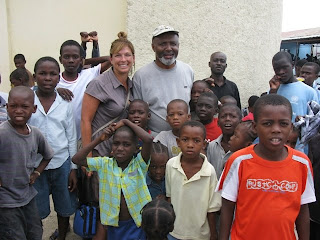