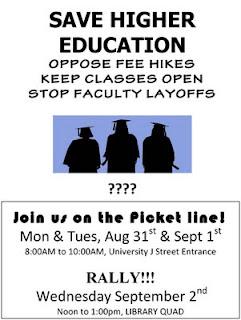 Stealing From the Youth

On Monday and Tuesday, we will be picketing to protest budget cuts at Sac State.
Meet us at the main entrance (J Street side) from 8-10.

On Wednesday we will be holding a rally in the library quad from Noon-1 to protest these severe budget cuts. Please come out. This is the beginning of a long effort to change the way the state views higher education. See you there. Below are the facebook links for these events:

You are young and dynamic and want to prove your worth in business world. But you don’t have required capital that any big business requires. Don’t worry FPA (Premier Financial Alliance) is company which helps you fulfill your this dream without risk and without investing money. Several peoples have been benefit by FPA (Premier Financial Alliance) programs.