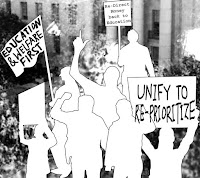 Today our newspapers will be dominated by the headlines that March 4 was a historic day for public education. They will say that never before have so many people from all the sectors of education mobilized across the state and country.
They are right that March 4 should be remembered for all of these things. Unfortunately, the real history-making day will have been misquoted. It is our actions and decisions on March 5 that will truly mark just how determined we are to transform our broken education system.

March 4 alone will not guarantee an end to the budget cuts. To fight them, we must start connecting public

education with other societal issues, namely the runaway spending on the wars, prisons and banks. This is not because we wish to take on all the issues plaguing our society but because these issues are intruding into our campuses and wallets, whether we want them to or not.

It costs an estimated $1 million to deploy a soldier to Afghanistan for a year and $49,000 to incarcerate a prisoner for a year in California. The state of California spends less than $10,000 to educate one K-12 student each year. The tradeoff is clear and unjustifiable.

Participating in and organizing for the March 20 anti-war protest in San Francisco would be a good start to contesting these misplaced priorities.

Successfully connecting these issues will also mean building more deeply the links we have been making with the other sectors of public education beyond the University of California.

On simply moral grounds we ought to stand in solidarity with K-12 because our brothers, sisters, sons and daughters are facing cuts and lost opportunities much worse than our own. Public school budgets for K-12 campuses rely much more on state funds (which roughly constitute 13 percent of the UC budget) and so they are more susceptible to cuts.

Also, a well-funded K-12 system will raise the quality of our universities and do much to address the terrible underrepresentation of students of colors in the UC system. Furthermore, uniting with other sectors will support us in our own fight.

For example, during the 1968-69 strike at San Francisco State University that shutdown their campus for nearly five months, the Black Student Union was able to mobilize as many as 2,000 high schoolers to support the strike because the youth knew that the college students were fighting for their university as well. If we want support, we must earn it by reaching out to the other sectors.

To truly look forward, though, we must reaffirm what has brought us this far. March 4 was the product of persistent grassroots mobilizing and organizing. Such grassroots organizing brought us the initial spark on the university campuses as well as the Oct. 24 statewide conference of students, workers, and activists that called for the actions and strikes on March 4. From that conference many local organizing committees were organized that built up the March 4 events.

We must continue this grassroots organizing as it is the best method to build the mass movement we need. It is the only way ensure that the politicians and UC Board of Regents

follow through with their promised commitments to affordable and accessible public education.

So I encourage you to start talking to your friends and coworkers about how to get more involved.

If you live in the Bay Area, bring yourselves and your friends to the Regional Mobilizing Conference that will be held at Laney Community College in Oakland on March 27. From there, we can coordinate and organize for the fight back that will, by necessity, be a long one.

All over the country, predictions are that the budget deficits will continue at the same destructive levels for many years if nothing changes. We can change that, but only collectively.

Then, when we are successful, history will remember just how important a day March 5 was.

© 2010 The Daily Californian
Nick Palmquist is a UC Berkeley student and a planner of the March 4 protest.
Posted by Paul B at 12:37:00 PM