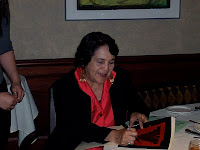 Dolores Huerta will  celebrate her 80th. birthday with activism.
Dolores, along with Cesar Chavez, Philip Vera Cruz and others created the United Farm Workers union, the first successful union of farm workers in U.S. history.
Each of the prior attempts to organize farm worker unions were destroyed by racism and corporate power. Huerta and Chavez chose to build a union that incorporated the strategies of social movements and community organizing  and allied itself  with the churches, students,  and organized labor.
Dolores was long the Vice President of the UFW and the chief negotiator of contracts as well as the primary advocate for farm worker rights in the legislature. The successful creation of the UFW changed the nature of labor organizing  in the Southwest  and contributed significantly to the growth  of Latino politics in the U.S. Dolores was recruited into DSOC ( predecessor of DSA) by Michael Harrington.

Today Mexican, Mexican American and Puerto Rican union leadership is common  in our major cities and in several  industries. Hundreds of activists in labor, community organizing and politics  owe their skills to UFW training and experience.    Training this cadre of organizers remains a major legacy of the UFW.
Dolores Huerta continues her important education and organizing work  today.   She is the President of the Dolores Huerta foundation a 501(c)(3) “non-profit organization whose mission is to build active communities working for fair and equal access to health care, housing, education, jobs, civic participation and economic resources for disadvantaged communities with an emphasis on women and youth.” The foundation was started  with funds received after she was assaulted and severely injured  by police during an anti war demonstration in San Francisco.
Dolores has long been known for her political activism.  She serves on the board of People for the American Way and the Feminist Majority Foundation as well as active within the Democratic Party.   She speaks frequently at colleges, universities, and high schools  providing inspirational speaker from a Latina  activist, feminist perspective to all, particularly to young women in school and community groups.  She is a recognized leader in civil rights and immigration issues.  Shown here during a speaking engagement at Cal. State U. Sacramento.  Dolores openly acknowledges her socialism in her speeches.
Being a socialist has some down sides.  In March of this year  the Texas Board of Education held hearings and adopted over protest new History /Social Studies guidelines moving   the textbook selection process of Texas  significantly to the right.  According to testimony by board members,  Dolores Huerta was a target of exclusion  in the Texas version of history because she is a known socialist- a member of Democratic Socialists of America. We are proud to have her as a member of our organization.
This tribute is from the Spring issue of Democratic Left.
Duane Campbell is a Professor of Bilingual/Multicultural Education at Calif. State University-Sacramento (emeritus)  and the author of Choosing Democracy; a practical guide to multicultural education.  4th. edition. (Allyn and Bacon, 2010.)
Posted by Duane Campbell at 8:33:00 AM