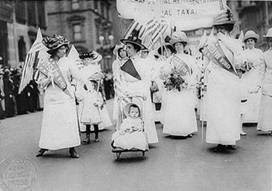 CELEBRATE THE 90TH ANNIVERSARY OF THE 19TH AMENDMENT
A Celebration of Women’s Suffrage and a Protest of Meg Whitman – Whose Voting Record Dishonors that Tradition
Thursday, August 26th, 2010
3 PM: Gather for March at the Sacramento Convention Center
4 – 6 PM: March to the Capitol’s West Steps & Rally
Join our special celebration of Women’s Right to Vote and protest billionaire CEO Meg Whitman’s record of rarely voting for nearly three decades - except now that she is on the ballot.
Thousands of women, and men, fought for decades to secure this basic democratic right.
On August 26, we will honor the achievements of the suffrage movement, and the women who were imprisoned and abused in the fight.
We will also continue our protest of Meg Whitman, who has disgraced the suffragists’ legacy, and now thinks she is entitled to be governor because of her wealth and privilege as a billionaire corporate CEO.

Hosted by the California Nurses Association/National Nurses United and other community and labor organizations.