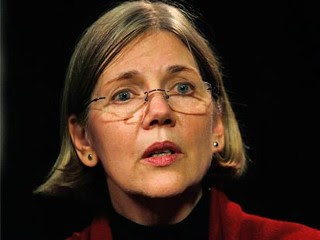 This is the boldest step Obama's taken so far to rein in the big Wall Street banks. And it's a major victory for grassroots progressives who rallied for Warren.
The banks fought to keep her out of this job—and now that she has it, they'll do whatever they can to keep her from exercising her full authority. That's why we need to get the word out—to make sure she has the grassroots support she needs to aggressively police Wall Street.
So we made a video of Warren's greatest hits from her appearances on the "Daily Show" and a list of five cool facts about her. Check them out at the link below and send them to all your friends:
http://pol.moveon.org/warren_fivethings_share.html?id=23486-2956400-gvpaARx&t=2
Top Five Things You Should Know About Elizabeth Warren
1. The Consumer Financial Protection Bureau was her idea.  Here's why she thinks this agency is so critical: "It is impossible to buy a toaster that has a one-in-five chance of bursting into flames and burning down your house. But it is possible to refinance your home with a mortgage that has the same one-in-five chance of putting your family out on the street."1
2. The Republicans are so scared of her, they tried to pass a law blocking her from leading the agency. Republicans in Congress and the big Wall Street banks have always been against Warren leading the new consumer agency. Republicans even offered an amendment that was widely understood as designed to block Warren. That amendment failed.2
3. She is one of the most prominent, successful and fierce female lawyers in America. Coming from working-class roots, she graduated from high school as a debate star at 16. She finished law school when she was nine months pregnant. And she has repeatedly been named one of the 50 most influential female lawyers by the National Law Journaland was twice nominated as one of Time magazine's 100 Most Influential People (among other honors).3
4. She spoke truth to power about the failed foreclosure program. The Home Affordability Modification Program was supposed to save homeowners from losing their homes but has left many deeper in debt than they were before. Warren used her position on the Congressional Oversight Panel to bring the voices of these disaffected homeowners right to the decision makers in the administration and demand accountability. 4
5. She may have actual superpowers. She once calmed a crowd at an NBA game with her encyclopedic basketball knowledge. She explained the financial meltdown so clearly to Jon Stewart that he said it made him "want to make out with" her. And there's a viral cowboy rap video about her.5
Check out the video of Warren on the "Daily Show" and share it with your friends and family. Just click here:
http://pol.moveon.org/warren_fivethings_share.html?id=23486-2956400-gvpaARx&t=3
Thanks for all you do.
–Nita, Daniel, Anna, Jeff, and the rest of the team
P.S. Here is Elizabeth Warren's reaction to the news, with more information on her new role:
http://www.moveon.org/r?r=90375&id=23486-2956400-gvpaARx&t=4
Posted by Duane Campbell at 9:27:00 AM

I really like Elizabeth and think she would have been a great choice, but there was always something outsider about her that scared people.