A New Coalition Wants What It’s Been Promised; Does It Have What It Takes To Go Get It? 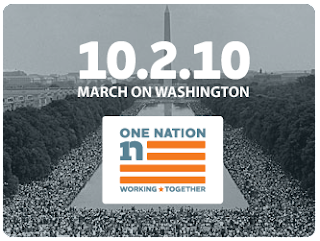 September 21, 2010
by J.A. Myerson
The Busy Signal http://thebusysignal.com/
On October 2nd, a coalition of progressive organizations will march on Washington to “Demand the changes we voted for.” Specifically centered around “jobs, justice and education,” the rally hopes to provide a progressive counter-balance to the recent spate of large demonstrations presented by Glenn Beck, Fox News and assorted tea party organizations.

The One Nation Working Together coalition (ONWT), constituted primarily by labor unions (the AFL-CIO, SEIU, AFSCME), civil rights organizations (NAACP, Human Rights Campaign, Rainbow/PUSH Coalition) and peace groups (United for Peace and Justice, Code Pink), hopes, in the words of one organizer from partner organization 1199/SEIU, to “seize back the debate from Sarah Palin and the right wing, who have dominated the political conversation in this country as though they won the election in 2008.”

Patricia McNamara, a field staff organizer for the upcoming march, found herself unemployed recently and unable to find an opportunity to put her qualifications to good use, and so takes the march’s message personally. “I’m hopeful that Obama’s heart is in the right place,” she told me, “and that this is what he needs: people from all over, standing up in protest, making certain they’re part of this march, holding him accountable.”

The demonstration is officially non-partisan, a fact Ms. McNamara was intent on emphasizing, but the coalition organizing it is made up almost entirely of groups that endorsed Barack Obama for president and provided electoral foot-soldiers and field organizers for his campaign two years ago. Additionally the “changes we voted for” slogan seems to admit that the marchers are not likely to be Republicans, since “Change We Can Believe In” was the Obama campaign’s rallying cry.

The progressive movement finds itself between a rock and a hard place, with the outlook for the mid-term elections, just over a month away, very bleak for Democrats. Number cruncher Nate Silver, a New York Times blogger and founder of FiveThirtyEight, projects that a Republican take-over of the House of Representatives (and by a twelve-seat margin, no less) is likely, and that the Democrats’ majority in the Senate will be cut in half. At the same time, however, the Democratic supermajority in both houses and the enormous presidential mandate have yielded little by way of progressive change in the last two years: when the administration wasn’t abandoning progressive principles (cap and trade, comprehensive immigration reform, single payer or public option health care), it was doling out open hostility (Press Secretary Robert Gibbs’ criticism of the “professional left,” Chief of Staff Rahm Emanuel’s deployment of his customary vocabulary when discussing ONWT partner organization The United Auto Workers).

The New York Times reported Saturday that the left is biting the bullet this year and working ever more vigorously for candidates who are ever more contemptuous of the support.

It is a measure of the dread among Democrats and their labor allies that several unions are no longer threatening to withhold endorsements from some conservative or moderate Democrats, like Representative Zack Space of Ohio, because they had bucked labor on health care legislation or other issues. Now, unions are generally backing those Democrats, feeling labor cannot afford such a strategy when the Democrats’ prospects seem so troubled.

This comes at a time when the right wing has chosen the opposite strategy. Not a week before that article’s publication, right wing voters, dissatisfied with their Republican representation in congress, voted for insurgent tea-party candidates to replace members of the GOP’s establishment on November’s ballots. The GOP grassroots have proven themselves independent of the Republican establishment and willing to buck the party and take its reins, having primarily the effect of capitulation from the party’s leadership, which has taken a hard-right turn in order to preserve the conservative coalition.

Without the threat of abandonment, though, it will continue to be the progressive grassroots who serve the Democratic establishment and not vice versa. While the left has long been good at engineering large protests, it has yet remained unable to secure support for progressive causes in the halls of power. The ONWT coalition, if it aspires to political efficacy, would do well to determine and publicize what actions are impermissible for the Democrats to take. If it doesn’t, it will continue to be taken for granted by politicians who can abuse its support.

Ms. McNamara was hopeful that the rally itself would inspire a change in heart from elected officials in Washington. “I think that when our officials see how many constituents are on their front lawn, it’s going to be a new day, and they’ll wake up. They have to turn their attention to the regular people who make up the majority, not just the privileged few. We should start seeing some of that immediately, recognizing that the election is a month away, given that incumbent officials are seeing now that they’re having difficulty.”

However optimistic McNamara is about the results of this march, she anticipates that this coalition will have life beyond the event. “One Nation has every intention of being around October 3 and after that. This is not just a one hit organization.” If her optimism is to be justified, the left will have to develop the skill that will serve it best: the progressive coalition will have to play Lysistrata to the Democrats’ Greek warriors and begin to withhold.
Posted by Paul B at 1:49:00 AM

Email ThisBlogThis!Share to TwitterShare to FacebookShare to Pinterest
Labels: One Nation March, One Nation Working Together