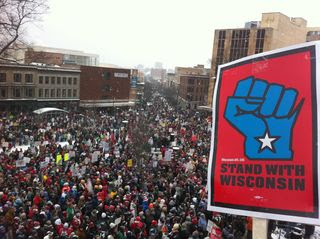 By James Kelleher and David Bailey

(Reuters) - A crowd estimated at more than 70,000 people on Saturday waved American flags, sang the national anthem and called for the defeat of a Wisconsin plan to curb public sector unions that has galvanized opposition from the American labor movement.

In one of the biggest rallies at the state Capitol since the Vietnam War, union members and their supporters braved frigid temperatures and a light snowfall to show their displeasure.

The mood was upbeat despite the setback their cause suffered earlier this week when the state Assembly approved the Republican-backed restrictions on union collective bargaining rights over fierce Democratic objections.

"I'm deeply honored to be here with you," said Peter Yarrow, a veteran of many social protests during his 50-year folk music career and a founding member of the group Peter, Paul and Mary. "If you persist, you will prevail."

What began two weeks ago as a Republican effort in one small U.S. state to balance the budget has turned into a confrontation with unions that could be the biggest since then President Ronald Reagan fired striking air traffic controllers nearly 30 years ago.

Republicans still must push the measure through the state Senate, which has been unable to muster a quorum for a vote because of a Democratic boycott.

If the plan is approved in Wisconsin, a number of other states where Republicans swept to victory in the 2010 elections could follow. Already, other legislatures including Ohio, Indiana, Iowa, Idaho, Tennessee, and Kansas are working on union curbs.

Unlike previous protests, the rally on Saturday brought out thousands of union workers not directly affected by the bill, including the state's firefighters, exempted along with police from the Republican proposal. Dozens of private sector unions were represented as well at the event.

No "Tea Party" supporters of the proposal championed by Republican Gov. Scott Walker were spotted on Saturday. They staged a smaller rally of their own in Madison a week ago.

The rally felt more like a party than a protest.

"This is one of the largest sustained protests we have seen in Madison since the Vietnam War. And to my knowledge there were absolutely no problems," Madison Police spokesman Joel DeSpain said.

Scott Sumer, a teacher from Rockford, Illinois, just south of the Wisconsin state line, said he hoped the sustained and broad-based opposition to the Wisconsin bill would discourage lawmakers in other states from considering similar measures.

"Other governors are going to see this and think, 'I don't want to go there.'" Sumer said. "The tenacity of this movement and civility here are impressive."

Demonstrators chanted "Hey hey, ho ho, Scott Walker has got to go," as they stood directly under the office window of the state's new governor, who introduced the controversial measure as part of a budget deficit cutting bill that is moving in the Wisconsin legislature.

The stakes are high for labor because more than a third of U.S. public employees such as teachers, police and civil service workers belong to unions while only 6.9 percent of private sector workers are unionized. Unions are the biggest single source of funding for the Democratic party.

Some of the demonstrators carried signs, others pushed baby carriages, and others walked with their dogs by their sides.

The overwhelming anti-Walker sentiment of the demonstration was telegraphed in many ways, including a sign that read: "Scott Walker for President ... of Libya."

U.S. labor groups also staged rallies across the country to show solidarity with Wisconsin in fighting the proposal they see as trying to break the union movement.

Wearing thick outerwear and her 10-month-old son strapped to her belly, Tamarine Cornelius, 36, carried a sign that read "If Wisconsin is gonna become Mississippi than I am gonna want better weather."

"I understand that there are tough times ahead, things are going to be difficult no matter what. I think most people understand that," said Cornelius, who works for the non-profit Wisconsin Council on Children and Families.

People in the state capital of Madison, which is home to unionized state government agencies and the University of Wisconsin, are overwhelmingly opposed to the governor's plan. But Republicans said they believe there is a silent majority who voted Walker into office, and support the efforts.

Republicans appeared defiant in the face of the union protests. In Phoenix, potential Republican presidential candidate Tim Pawlenty, a former governor of Minnesota, a neighbor of Wisconsin, drew applause from "Tea Party" activists when he blasted President Barack Obama for supporting the Wisconsin unions.

"It says in the Constitution: 'In order to form a more perfect Union.' ... Mr. President, that does not mean coddling out of control public employee unions," he told some 2,000 partisans gathered for a conference.

The Wisconsin changes sought by Walker would make state workers contribute more to health insurance and pensions, end government collection of union dues, let workers opt out of unions and require unions to hold recertification votes every year. Collective bargaining would be allowed only on wage increases up to the rate of inflation.

(Reporting by James Kelleher, David Bailey and Stefanie Carano in Madison; Additional reporting by Tim Gaynor in Phoenix; Editing by Greg McCune)
Posted by Paul B at 1:51:00 PM

Closer to home, the Rally in Sac: http://www.youtube.com/watch?v=Xn7Y75vR7F4