Rev. Jesse Jackson Tells 50,000 in Wisconsin: 'This is a Martin Luther King Moment!' 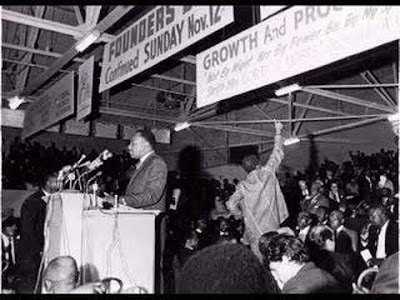 “This is a Martin Luther King moment!”

So declared the Rev. Jesse Jackson [1], as he finished addressing a crowd of more than 40,000 at that had filled the grounds of Wisconsin’s state capitol. A few minutes later, he would enter the capitol and address a crowd estimated at 8,000, which filled what has been called America’s most beautiful government building to capacity.

The capitol was never more beautiful than on Friday night.

Jackson, who spent most of Friday with the massive crowds that have filled downtown Madison since Wisconsin Governor Scott Walker announced a plan to end collective bargaining rights for the teachers, daycare providers, emergency technicians and all other state, county and municipal employees. He marveled, constantly, at what he was seeing,

“This is where it’s at. This is the epicenter of the struggle for America’s future,” he said, not as a grant pronouncement but with a hint of amazement in his voice as he promised an elementary school teacher who broke into tears when she saw that the veteran civil rights leader had come to join a struggle where crowds chant each night: “Labor rights are civil rights! Labor rights are human rights!”

“This is the first round of a longer battle to renew the integrity of our nation,” he told the crowds.


Jackson appeared on a day when the crowds scored their second major success in the fight to prevent passage of Walker’s legislation by Republican legislators. On Thursday, when the measure was supposed to be passed, Democratic state senators [2] left the state in order to deny a quorum for taking up the measure. On Friday, opposition from Assembly Democrats [3] was so focused and intense—and so closely linked to the crowds outside—that Republican leaders of the chamber decided to adjourn until Tuesday.

The ability of a mass protest movement to force a change in plans by a governor who has been referred to by the state’s longest-serving legislator as a “dictator” has led many to make the connection between the struggle of the Wisconsin teachers, nurses and public employees from foresters to snow plow drivers and the great democracy protests that have been seen in recent weeks across the Middle East. One sign held aloft Friday, as temperatures turned February frigid in Madison read: “I didn’t think Cairo would be this cold.”

There is no question that the Wisconsinites have taken inspiration from international events. They say as much, mocking the governor as “Hosni Walker.”

But the real connection, the deeper connection, is to the civil rights era, when Wisconsin students and labor leaders were among the most ardent northern backers of the freedom struggle. Union halls in Wisconsin invariably post photos from when King visited, or when their members joined the March or Washington for Jobs and Freedom. And prominent Wisconsinites of a certain age, such as Ed Garvey [4], the future leader of the National Football Players Association and Wisconsin gubernatorial candidate, proudly recall “going south” as Freedom Riders.

Now, says Jackson, with Walker’s attempt to break the state’s public employee and teachers unions. Jackson sees an attempt to bring some of the crudest structural characteristics of the South to Northern states such as Wisconsin. “The right-to-work laws, the barriers to unions, these were put in place to prevent workers from coming together, to keep black and white divided, to make it impossible for everyone to rise together,” explained Jackson. “Now, after all these years, they are bringing them north.”

When Jackson finally mounted the state for a rally organized by the Wisconsin Education Association Council [5] and allied teacher unions, he looked out across the massive crowds, in which many of those present carried hand-lettered signs that read: “Memphis 1968, Madison, 2011.”

Jackson, who was with King in Memphis, declared: “This is a Martin Luther King moment, this is a Gandhi moment.”

Celebrating the nonviolent character of the Madison marches—which are entering their sixth day—and similar rallies and events that have filled the streets of cities and towns across the state, Jackson concluded: “When we fight, we win. We fight in Montgomery, we win. We fight in Selma, we win.… We march in Madison, Wisconsin, we win.”
Source URL: http://www.thenation.com/blog/158740/jesse-jackson-tells-50000-wisconsin-martin-luther-king-moment