Thousands rally in Sacramento. Were you there? 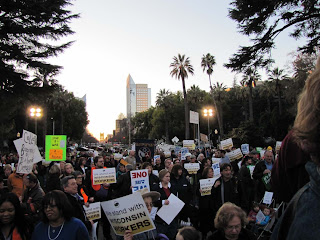 Over 6000 union members and supporters rallied at the State Capitol in Sacramento in a candle light vigil to support the working people in Wisconsin in their struggle to defend their  union rights. The financial crisis that began  2007  is an assault on organized  labor, working people, and our democracy.  To date the corporate class is winning.
While Wall Street has recovered and returned to profitability, working people continue to suffer  15 million unemployed with at least 10 million more under employed.   It is more than a crisis - the reality is that the financial class has looted the U.S. economy.  They took 13 trillion dollars  out of the economy and caused 4 million people to lose their homes and  another 4.5 million to fall into foreclosure.   Now they want you and I to pay for their greed by forcing budget cuts on the states.
In 2010-2011 the crisis is hitting state and local governments hard.  The AFL-CIO is tracking this assault at http://www.aflcio.org/issues/states/.    Responding the  messaging of the right many liberals stayed home on election day. Republicans and the Tea Party  won a majority in the House, took control of several state houses, elected governors, and now dominate the main steam media with their messages.  Conservative forces, the Republicans, the Tea Party, and others use the crisis in the states to launch aggressive campaigns against public sector unions and the salaries and pensions of public sector workers. 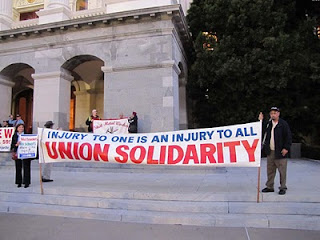 The Sacramento response, like rallies in other states condemned the anti union campaigns of Republican governors.  In Wisconsin Governor Walker's immediate attack is aimed directly at some 200,000 public workers in Wisconsin, -but the brave men and women taking to the streets for over a week now  come from every walk of life .
This fight is about far more than cutting salaries and benefits of dedicated public servants," said CTA President David Sanchez. " It is about fighting Governor Scott Walker's cynical attempt to undermine the rights of teachers and public sector workers to have a say in their professions."
In the  Sacramento response on Tuesday,  union teachers, public service workers as well as local unions such as ILGWU and the Steelworkers, the Sheet Metal Workers, all  united to oppose the actions of  Wisconsin Governor   Walker  and the Republican majorities in Wisconsin, Indiana, Ohio and other states.   David Sanchez, of the California Teachers Association, one of the largest union in the state, said that the attacks on teachers and public workers in Wisconsin were an attack on all workers and will be opposed.
Posted by Duane Campbell at 9:20:00 PM