We Are All Part of the Labor Movement Now 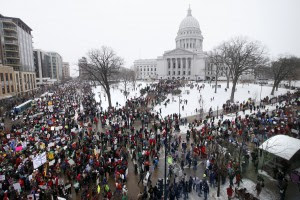 Speaking to a cheering crowd of eight to ten thousand outside of Chicago's State of Illinois Building Saturday, American Federation of State County and Municipal Employees (AFSCME) Deputy Director Roberta Lynch said, "whether you are a member of a labor union or not, we are all members of the labor movement now."

She was dead on. In a matter of less than a month, since Wisconsin Governor Scott Walker declared war on the right of public service employees to organize and negotiate the terms of their employment, the public's perception of organized labor has fundamentally changed.

For many who previously believed that unions were just another "special interest" they now represent a labor movement that is fighting for the rights of middle class Americans.


The struggle has become a movement because the battle is no longer simply about dollars and cents -- it is about principle. It is about rights. As the AFSCME banners say in Madison: "It's about freedom."

The battle of Wisconsin -- and all of the other states where right wing governors have trained their sites on public employee unions -- is no longer just a struggle over wages and benefits. It's no longer about the "state budget." It has become a struggle about the dignity of middle class Americans -- about the principle of whether everyday people have the right to sit at a bargaining table and have a say about their wages, their working conditions, and their jobs. It has become a symbol for the desperate desire of everyday Americans to stand up straight and fight back against the forces that are destroying the middle class.

Walker intentionally transformed this battle into a struggle over principle by refusing to accept Wisconsin union member's willingness to take cuts in salaries and benefits in order to balance the state budget. Instead he has insisted on stripping everyday, middle class Americans of their right to have a say.

Luckily for the future of the middle class -- the labor unions -- and the millions of others who are now part of the new, broader "labor movement" have risen to the challenge.

As USAction President William McNary said, in an inspired speech to the crowd in Chicago, this is a battle about human dignity the same way that the garbage worker's fight for union recognition in Memphis, Tennessee in April of 1968 was a struggle for human dignity. That was the battle that drew Dr. Martin Luther King to Memphis to make his famous "I've been to the mountain top" speech -- just before he was gunned down by James Earl Ray.

Martin Luther King inspired the world by his sacrifice in Memphis 43 years ago. He was there to champion precisely the cause that has become the center of the struggle in Wisconsin.

Saturday, MoveOn.org and its allies like USAction -- together with public employee unions, teachers unions -- and labor organizations of all shorts -- organized rallies to support the workers in Wisconsin in every state capitol and most major cities. Hundreds of thousands participated.

Usually rallies like this take months of planning and require hundreds of busses to assure turn out. These rallies were organized on several days' notice. People told their neighbors who told their neighbors. The on-line tools that have helped turbo-charge the movement for democracy in the Arab world allowed notices of rallies to go out in seconds.

The turn out was about the wide spread anger at what Governor Walker has proposed - but mainly it was because people were inspired by the resolve of the workers in Wisconsin - and the Democratic State Senators who have stood their ground.

The Obama campaign inspired millions. It engaged their hunger for meaning and purpose -- for empowerment and hope. It wasn't mainly about what they thought about Barack Obama -- or what he could do for them. It was about how he made them feel about themselves -- about what they themselves could achieve.

In the two years since President Obama's Inauguration, America had lost that feeling in the difficult struggle to dig out of the Great Recession and the "sausage making" of political battle in Congress.

In the last month, many Americans have found it once again.

The people in Chicago Saturday were from every ethnic group. They were veterans of the Progressive Movement and they were kids for whom this was the first experience of the feeling that comes when you're part of something historic.

The radical right wing Republicans decided to strike now to destroy organized labor. They wanted to destroy it because it is the only institution in the country that prevents Wall Street and the largest international corporations from having their way with America. Organized labor is the only organization that can simultaneously stand up for the middle class at the bargaining table and the ballot box.

But by making their play to destroy unions they risked something that from their point of view is much worse - a reborn labor movement - one that involves labor union members - and millions of others throughout America.

Instead of creating political momentum to destroy unions, the right has sparked its worst nightmare - the rebirth of the labor movement.

On his way to the Chicago rally, and AFSCME staffer was stopped by a young woman in a parking garage. She asked him about the AFSCME insignia on his jacket. "Are you part of the organization that's defending the workers in Wisconsin?" she asked.

"I'm an organizer for the union, " he responded.

"Very cool! I'd like to do that too," said the young woman. That wasn't exactly the idea, was it, Governor Walker?

Robert Creamer is a long-time political organizer and strategist, and author of the book: Stand Up Straight: How Progressives Can Win, available on Amazon.com.
Posted by Paul B at 7:24:00 PM