Not a Union Member? Why You Should Care About Wisconsin (or Ohio or Michigan)

After two weeks of protests in Wisconsin, we are now watching demonstrations spread across the country. Over the weekend, the online advocacy group MoveOn.org helped mobilize tens of thousands of people, who marched in all 50 state capitals in support of Wisconsin workers. Demonstrators are speaking out against attacks by Republican governors in Ohio, Indiana, and Michigan and their own states.
It is entirely appropriate that protests should spread, because recent events in Wisconsin are only a window into what is happening in states scattered across the country. It is important that we understand the scope of this debate. This is a discussion that has impact on all Americans, not just union members. One point should be clear: This is not a story of public employees trying to feed at the trough. It is a story about whether or not governors can take away fundamental workers' rights.
Everyone in this country is entitled to their opinion about politics and public policy. Every governor is free to propose policies that he or she feels are in the public interest, even if others might disagree with those actions. But they must follow the rule of law. 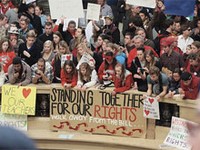 In this case, newly elected Republican governors can certainly negotiate contracts with public employees. But there is a lawful process for such negotiation. It involves sitting down at a bargaining table, talking through disagreements, and coming to a mutual agreement. Instead of engaging in this process, governors like Wisconsin's Scott Walker want to unilaterally take away people's rights, while claiming that they are doing something entirely different. He and others like him are using budget issues as a subterfuge for their power grab. That is not acceptable. And it is why they have stirred the passions of so many.
Many people may not see collectively bargaining as relevant to problems in their own work lives. You might think, I don't need a union because I'm a professional. Even if this is the case, you are nevertheless affected by a growing imbalance of power in today's workplaces.
There was a time in America when employers couldn't unilaterally decide to take away health care or pensions. Workers had some say in deciding to accept less in wages in order to hold on to their families' health care coverage. Yet in recent decades, we've moved toward a situation where there are little or no counterbalances to the whims of employers. America's once-strong middle class has dwindled as a result.
Whether any of us happen to be union or non-union, we need to get back to the day when people had a say in negotiating the terms of their employment. In the past, public employees opted to prioritize their health care and retirement over other forms of compensation. They should still have a right to believe their employers will abide by the legitimate contracts they previously negotiated. They have the right, in other words, to be treated just as any of us would expect to be treated when we've come to an agreement with an employer regarding our livelihoods.
It is important to understand that this is not a question of tightening belts to cope with a moment of economic crisis. Public employees in Wisconsin and beyond have been very clear that they are willing to bear their share of common sacrifice in tough times. But they are not willing to give up the basic rights to associate, to belong to a union, or to organize collectively.
This is something that should matter for all Americans. Because if our rights related to association and collective bargaining can simply be denied, taken away as part of an executive initiative disguised as being about something else, then other rights are also at risk. We avoid restricting freedom of speech in our country because we recognize that encroachments on our freedoms create a slippery slope. One violation of basic rights leads to another. If we don't stand up now against abuses of power on the part of state executives, the safety of our dearest liberties could be called into question.
Our ability to freely associate and form organizations to advance whatever political and economic interests we might have is one of the things that makes this country great. It is something that Alexis de Tocqueville admired about American democracy when he wrote his renowned observations about our political system in the early nineteenth century.
We abandon this democratic tradition at our peril. A politics that condemns public employees for being greedy because they insist on maintaining their rights is profoundly dishonest and dangerous. The fact that we have elections in this country is not enough to safeguard our democracy. If we allow rights to be restricted, under the auspices of a twisted interpretation of the rule of law, we follow a treacherous path that has historically led the way to tyranny.
Those outside of Wisconsin who have joined in solidarity protests, and those speaking out against assaults by their own governors on middle-class employees understand that this issue impacts us all. Our rights are too precious to be sacrificed without a fight.
Amy Dean is co-author, with David Reynolds, of A New New Deal: How Regional Activism Will Reshape the American Labor Movement. She worked for nearly two decades in the labor movement and now works to develop new and innovative organizing strategies for social change organizations in progressive, labor, and faith communities. You can follow Amy on Twitter at@amybdean, or she can be reached via the Web site, www.amybdean.com.
Follow Amy B. Dean on Twitter: www.twitter.com/amybdean
Posted by Paul B at 9:49:00 AM