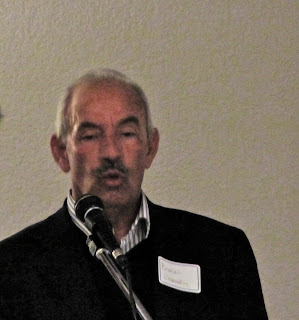 By Duane Campbell
Leaders in the Tunisian Federation of Labor, themselves organizers  of the mass mobilization that led to the overthrow the Tunisian Dictator called for support of the Libyan revolution and for support of Tunisian unions and the  Egyptian Democracy Movement  at a solidarity dinner held by  the Sacramento Central Labor Council and the California Labor Federation  in Sacramento on March 20, 2011.  Delegates and members of community based organizations heard a direct report from the leaders of the labor side of the mass mobilizations.  The Tunisian revolution was the first of the over 6 major revolutions presently changing the nature of politics and freedom in the Middle East.  The success of the Tunisian revolution sparked the hopes and encouraged the other revolutions.
Labor unions in Tunisia have been suppressed by the government for over two decades.  The limited labor unions have been active in the resistance to the dictatorship for these decades.
As of today, the Libyan revolution is still being resisted by the armed forces of Colonel Gadafi with planes, tanks and guns.  Non violent  revolutions are shaking Yemen and Bahrain (where oil workers are on strike), among others.  The revolutionary movement in Egypt has won initial success, by toppling the Murbarak dictatorship,  but consolidation of the revolution is still precarious.
A delegation of union leaders from  Tunisia praised the role of the youth movements and  described their own  role of the union movement in organizing and assisting the Tunisian revolution of Jan. 14 to overthrow the dictatorship.  A general strike had been called for Jan.14,  and began at the labor offices on the day when the revolutionary movement won control of the country and the dictator and his family fled.
The union activists from the Women’s Federation, the Professors Union, and the Public Workers unions are a delegation traveling in the U.S. as guests of the  staff of AFL-CIO solidarity house.  They asked for unions to support them in two ways: support a moratorium on repayments of the debt  to the I.M.F. and the World Bank ( accumulated by the dictatorship), and asking the U.S. to freeze the  U.S. assets of the former dictator and his family.
The representatives were UGTT leaders Abdellatif (Lotfi) Hamrouni, the Secretary General of the Union of Public Sector and Housing Workers, Dr. Najoua Makhlouf, the chairwoman of the Committee on Women Workers at the UGTT and Sami Aouadi, the Secretary-General of the Federation of University Professors and Teachers of Tunisia